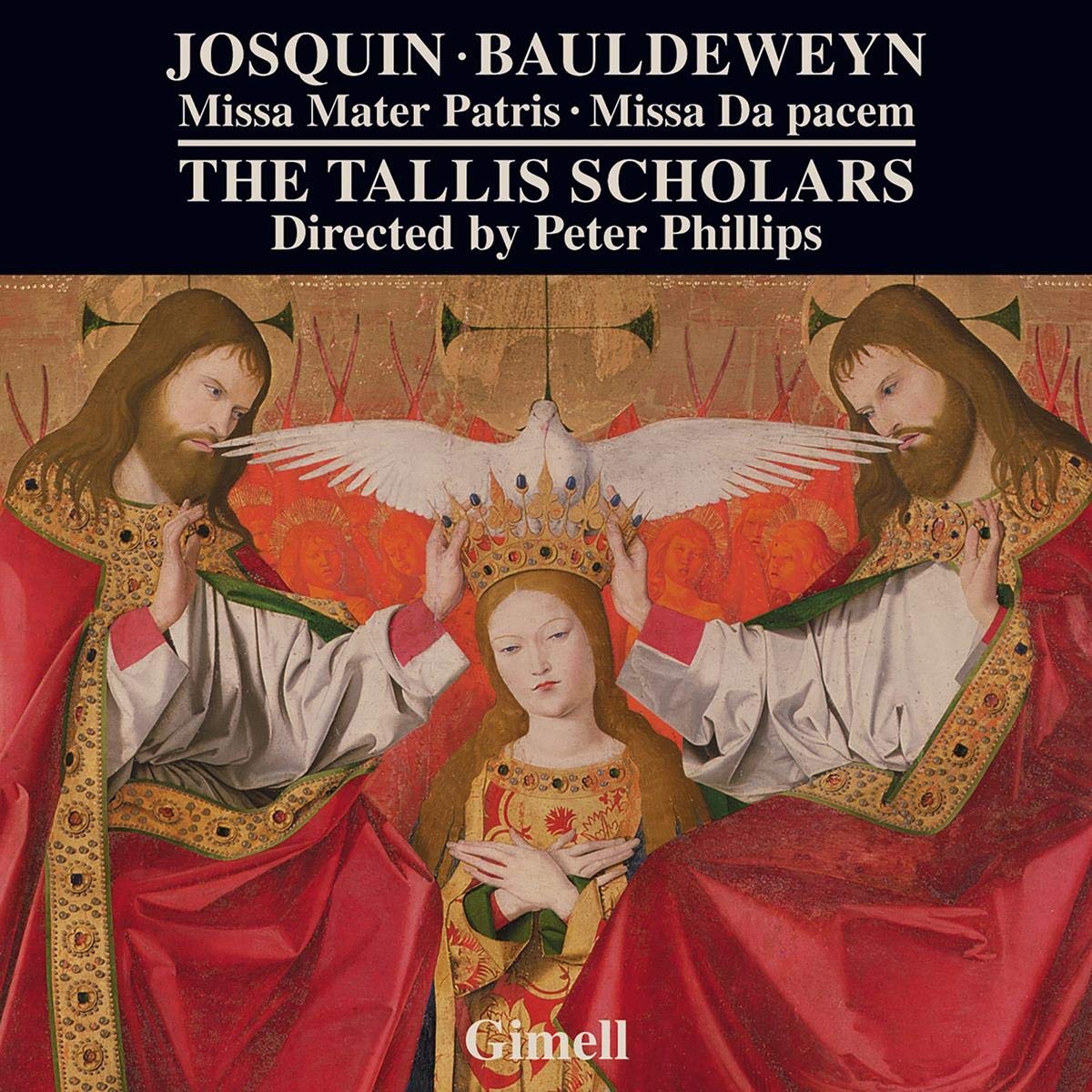 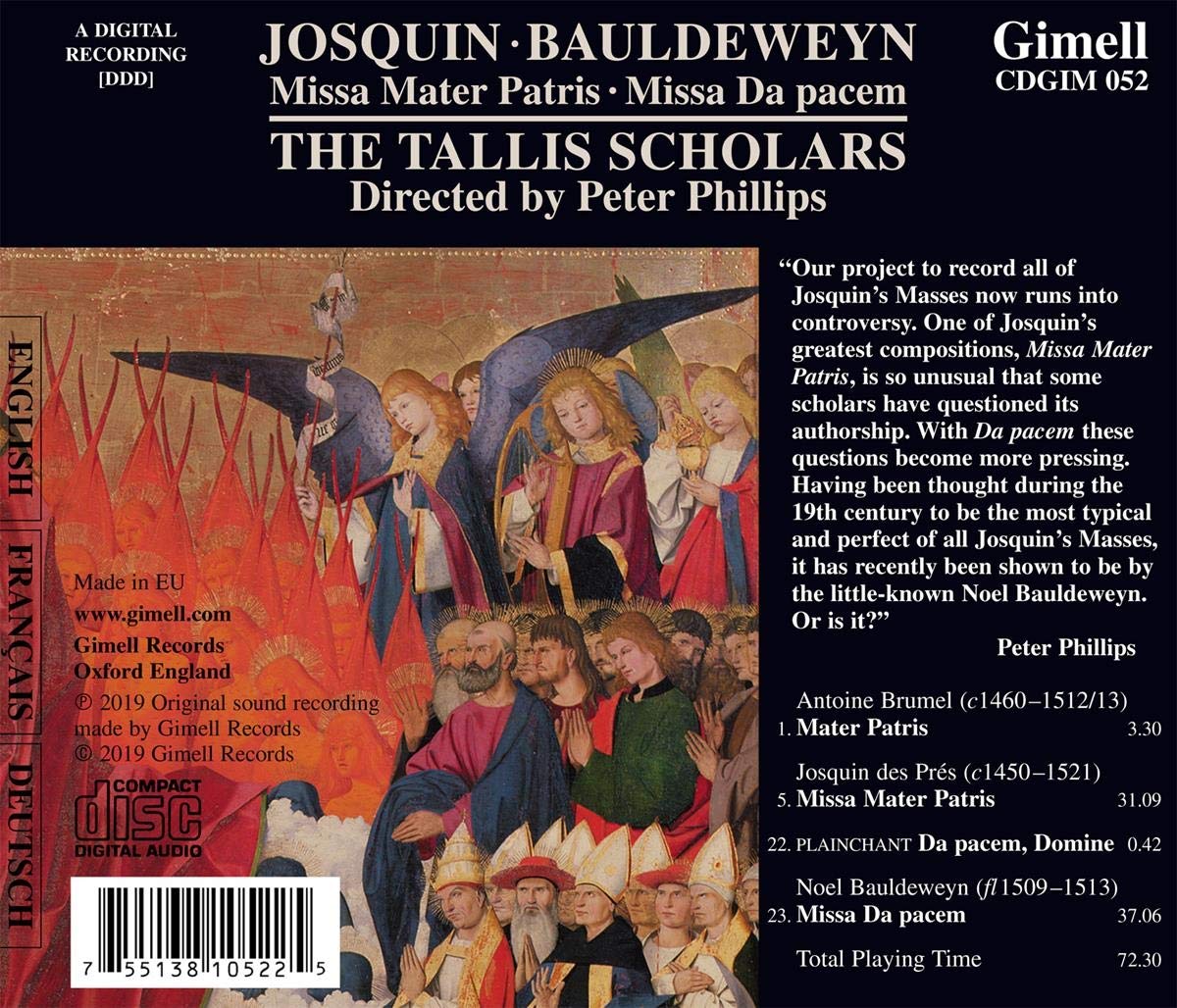 There is so much that is fine about this recording, i.e. everything, that it is difficult to know where to begin. Best perhaps with the pieces themselves. The Missa Mater Patris by Josquin Des Pres – if indeed it be by him – is an astounding creation. Written in four parts, with a fifth added for the third Agnus Dei, it is unique among his masses in referring to a work by another composer, Antoine Brumel, who was seemingly only a decade younger than Josquin. Because it is unique among Josquin’s masses, both in provenance and in musical style, it is inevitable that the revisionist police come sniffing round, eager to remove it from Josquin’s canon. Scarcely less impressive, the Missa Da pacem survives with attributions to Mouton, Josquin and Bauldeweyn in early sources, and throughout the nineteenth and into the twentieth centuries it was hailed as one of Josquin’s greatest compositions. Then in 1972, according to Peter Phillips’s cogent notes, Edgar Sparks established that it was the work of Noel Bauldeweyn, who flourished during Josquin’s lifetime. There is a commercial recording of four of his masses by the excruciatingly named but capable Beauty Farm, an ensemble based in Austria, on Fra Bernardo FB1709761, a double album.

What of the music itself? Mater Patris, the euphonious three-part motet by Brumel on which the Missa Mater Patris is based, is constructed largely of duets followed by short passages in all three parts. Josquin’s fuller punctuations tend to be homophonic, with harmonies and textures that glow gloriously, a quality that sets it apart from his earlier more polyphonic masses. Particularly memorable – one wants to say catchy but the context might be too serious – is his response to the word Hosanna and, while Brumel’s setting of the word “exaudi” lurks throughout the mass, here Josquin gives it full rein. Peter Phillips’s notes are excellent and, although I would take with a pinch of salt his suggestion that Josquin’s setting of Hosanna exhibits playfulness, it certainly shows a human side to this most technically assured of composers. While still showing maximum homage to Brumel, Josquin flexes his polyphonic muscles towards the end of the third Agnus in five parts, resulting in music emulated at the same point only by Palestrina and, particularly, Byrd. One corker of a dissonance at 4’05 left this listener breathless.

Missa Da pacem also in four parts, based on the plainchant “Da pacem, Domine”, is eminently fit to be mentioned in the same sentence as Josquin even though it has been established as a work of Bauldeweyn. Besides those fine passages (especially the fabulous third Agnus in six parts) mentioned in his notes by PP, the first Kyrie, Benedictus and first Agnus in particular present the work of a composer who, at his best, is comparable in stature to Josquin as, say, Alonso Lobo is to Victoria.

Recently I attended a concert by The Tallis Scholars under Peter Phillips at the Cadogan Hall in London, at which they performed Palestrina’s neglected but superb Missa Ave Maria a6, plus motets by Byrd (including his disorientatingly discordant six-part setting of O salutaris hostia described amusingly but accurately in the programme notes as “bonkers”), Handl, Morales and Palestrina again, with a neglected Magnificat by him to conclude. Their live singing was as good as I have ever heard it, and the same can be said about their recorded singing on this disc. They present the best possible case for these two masses, supported by outstanding sound engineering in which every part is equally audible and perfectly balanced.

Even after all this exhaustive advocacy I am still not sure that I have done this superlative disc adequate justice. Suffice to say, everything about it is the best.


The graphics for this Tallis Scholars release mention scholarly disagreement over the Missa Mater Patris, long attributed to Josquin but "recently shown to be by the little-known Noel Bauldeweyn," writes director Peter Phillips. "Or is it?" he adds.
He sketches out the controversy, pointing out that the mass does not resemble any of Josquin's other compositions in the genre; he doesn't answer his question. However, you might take the album as a rejoinder to those questioning the authenticity of the mass. Its possible removal from the Josquin canon rests entirely on this musical evidence, so Phillips is entitled to adduce musical evidence of his own: the genuine Bauldeweyn mass included here sounds nothing like Josquin but is basically a work in 15th century style with a bit of imitative counterpoint thrown in.
The Missa Mater Patris is a spectacular work, whoever wrote it. It does include long homophonic passages that were uncharacteristic of Josquin's time and the rest of his output (although apparently not very characteristic of Bauldeweyn, either). Thus, Josquin inflects his borrowed material, a motet by Brumel, in the directions of both simplicity and, at the end, the usual complexity.
Without taking an explicit position, Phillips admits that some parts of the Bauldeweyn Missa da Pacem are pretty dull, and he speculates that the parts that aren't might have been written by Josquin. The Missa Mater Patris is at its most Josquin-typical in the Incarnatus and Crucifixus, which introduce a new tonal realm in a way that probably no other Renaissance composer was capable of.
Whatever your ideas when it comes to the do-it-yourself musicology, the reading by the always strong Tallis Scholars is especially sensitive here, and Gimell's sound from the Chapel at Merton College is superb. Highly recommended, both simply for its pleasures and as a way to introduce the kinds of issues scholars of Renaissance music think about.