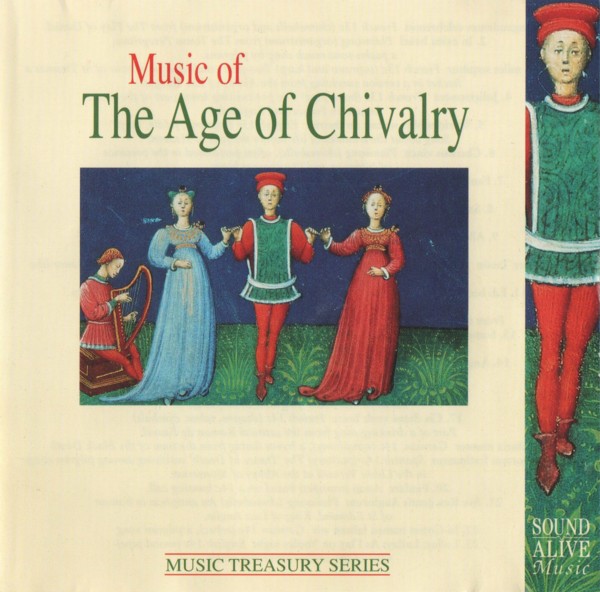 2. In exitu Israel  [1:06]  organistrum
Plainsong from The Tonus Peregrinus, a psalm-tone much sung by pilgrims.

3. Novus miles sequitur  [1:10]  soprano and harp   Hu  102
French 13c. Two-part conductus in honour of St Thomas, a Becket in a version surviving from the Abbey of Las Hueglas.

5. Worldes bliss ne last no throwe  [1:40]  soprano, fiddle, harp
English 13c.Song about the troubles of life before the joys of Heaven.

10. Chose Tassin  [0:41]  rebec and tabor   Mo 347
French 13c. Surviving as the tenor part of a motet, this dance-like melody is thought to be by the Parisian minstrel Tassin.

13. Sumer is icumen in  [0:32]  pipe and tabor
The main tune from the celebrated round from Reading Abbey.

19. Ad mortem festinamus  [0:57]  psaltery   LV  10
Spanish 14c. The 'Dance of Death' surviving among pilgrim songs in the Llibre Vermell at the Abbey of Monserrat.

Soundalive Music is part of the International Heritage Corporation


During the 12th and 13th centuries the Troubadors, the aristocratic poet/musicians of Southern France, brought into being a philosophy of love, or Chivalry. This was more than 'courtesy' or good manners. It implied valour and worthiness, honour and joy. This ideal, co-existing with the church, produced texts expressing passionate love of the human heart alongside a mystical devotion to the Virgin Mary. By the 1400s, as the code of Chivalry reached its fullest refinement, Orders of Chivalry, inspired by the fictional story of King Arthur, were founded throughout Europe and in England, where in 1344, Edward III founded the Order of the Garter at Windsor Castle.

This recording focuses on the musical instruments of this period as portrayed in carvings, stained glass and manuscripts. Many originated in earlier times, the harp, psaltery, rebec, crowd, organ, pipe, shawm, horn, chimebells and cymbals dating back to the Roman period. Other instruments appeared during the 13th century, including gittern, pipe and tabor, bagpipes and the portative organ. The small kettle drum seems to have come to Europe as a result of the Crusades and although the lute is first mentoned in a document of 1285, its earliest English portrayal (and those of its smaller version, the mandora) are from the 14th century.