This recording features a wide array of sonorities, the objective being to illustrate the variety of medieval life as it impinged upon the central place of social gathering, the church. The mass sections themselves are performed by an unaccompanied ensemble of vocal soloists, with organ incipits — medieval.org


MINSTRELS AND BEGGARS AT THE ENTRANCE OF THE CHURCH

ENTRY INTO THE CHURCH 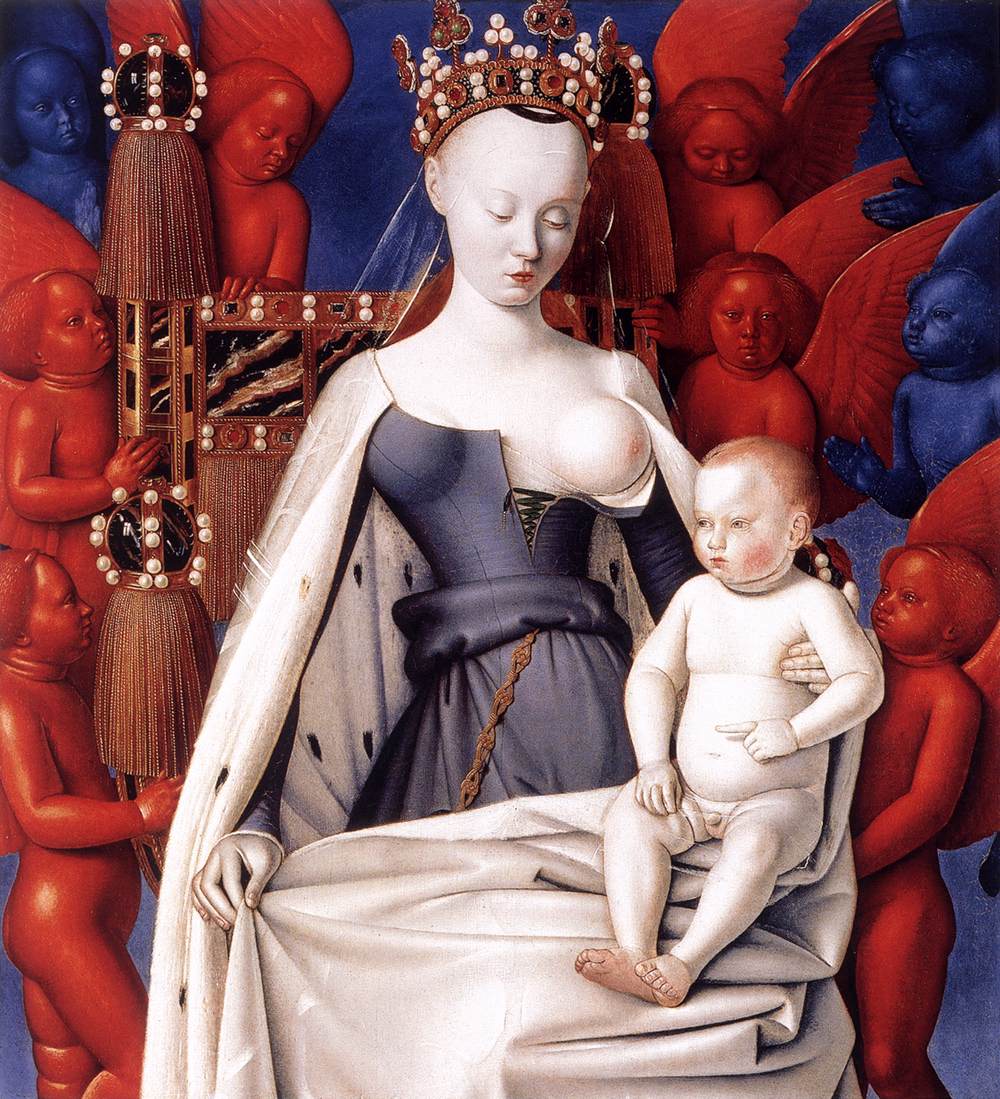 "Five hundred years ago, when the world was younger, all the events of human life found much more sharply defined expression than they do today. Between pain and joy, between disaster and good fortune stood a greater gulf than for us; all that man could experience still had that kind of directness and totality that joy and pain still have for the heart of a child today. Every aspect of life was lived out in ostentatious and dreadful openness. Lepers shook their rattles and formed processions, beggars wailed in the churches, putting their deformities on show. Great lords never moved about without pretentious expense on weapons and liveries — everything announced itself loudly with processions, shouts, cries and music. From these incessant contrasts, from the bright colours of the forms with which everything thrust itself on the attention, daily life provided a passionate stimulus which found its outlet in moods that ranged between uninhibited boisterousness, frequent cruelty and inner perturbation."


(from J. Huizinga, The Waning of the Middle Ages)

The Messe de Nostre Dame is a child born into this world. We have tried, in this recording, to make this mass comprehensible within the terms of its own world. Between the individual sections of the Mass sequence we have placed a colourful array of sacred and secular pieces. They are intended to surround the pillars of the Mass like arabesques, but also serve as tropes, marginalia and commentary. The Marian cult of the period was often not without an erotic element, the adoration of courtly love not without a spiritual transfiguration. The cathedral canon Machaut wishes to serve the Mother of God (addressed as "très belle") in knightly fashion, just as he would his worldly lady. From an exchange of letters between the 60 year old Machaut, blind in one eye and suffering from gout, and the very youthful "toute belle" Peronne, we have firm evidence of his approach to love. The sense of religion was then so overmastering that there was hardly any everyday event which could not somehow, however abstruse it may appear to us, be brought into conjunction with matters holy and sacred. Conversely, religion was often brought into the secular world. The church was not simply a place for pious devotion, but also a place of general assembly, particularly for sermons by famous preachers and for festival services. There was no shortage of exhibitions of aristocratic arrogance or feminine vanity, or of the tribes of outcast and excommunicated travelling entertainers and players. Just as at Christmas fairs, you might find here sellers of indecent prints, or prostitutes selling themselves. From church records of reprimands, complaints and consistently unsuccessful prohibitions, it seems that church singers, above all the soloists who performed close to the altar, behaved in a thoroughly secular fashion, accompanying their singing with excitable gestures ("cantus gestualis"), sometimes sang so softly as to be almost inaudible, then unbelievably loud, or broke up the melody with "hoqueti" (hiccuping similar short notes).

Worlds separated the popular music of the players, not fixed in any written form, and with a single part, happily using the "lascivious" major mode, and the highly complicated multi-part composition of this mass, set out in measured bars in a fixed written format. The notation alone was already so complicated as to be beyond the reading and writing skills of uneducated players, who could no longer take part here. Only clerics, those intellectuals of the Middle Ages, could decipher and sing these scholarly hieroglyphs. And yet the players, too, performed in the church. but with their own music, their popular Marian songs. Many of Machaut's single-part virelais are in popular form, and take their inspiration from the players' world, which often enough took them back again. Thus virelais in popular style are to be heard on this recording. That knightly magnificence which manifested itself in trumpet-calls (Buccina) and drum-rolls was also often effectively employed during High Mass at specially important and festive points, "ad maiorem Dei gloriam". Any vaguely romantic concept of piety was totally foreign at this period. God, his Mother and the whole company of saints were still a direct, first-hand and very close experience, to be worshipped with naive spontaneity. The performance material used in this recording, assembled by Colin Mason, attempts to do justice to some important aspects of 14th century performance practice. So far as the so-called „musica ficta" is concerned, some reservations must be entertained over accidentals. All six remaining sources of the Mass are later copies, and contain accidentals which are later additions by the copyist. Since the individual sections of the Mass appear to belong to different periods of Machaut's creative life, a fairly conservative approach appears the most reasonable. Performance by an ensmble of soloists, without instrumental accompaniment, seems to have been the norm for this kind of music, as evidenced by many sources, such as accounting documents. A total lack of definitive information about the vocal pitches used in 14th century France, and the tonal range specific to the Mass (around two octaves), prompted a decision to perform the Mass with an ensemble of tenors and basses.

The four soloists sing, as was usual at the time, from an individual copy of the notes, laid out, not as a score, but as a solo part for each individual voice. This allows greater independence of individual voices, but at the same time demands that performers listen to each other more intensely than if they were singing from a set of parts.


Guillaume de Machaut was born between 1300 and 1305 in Champagne, in France, where there is also a town of the same name. He died in April 1377 as a canon of Notre Dame in Reims. His life thus spans almost the whole of the 14th century.

In his youth, already by 1323, Machaut, educated as a scribe and a Master of Arts, became secretary to the King of Bohemia, John of Luxembourg. Over many years he accompanied the journeyings, campaigns and celebrations of the restless monarch, following him to Prague, Luxembourg, Paris, Silesia, Lithuania, Poland, Hungary and Austria. From 1340, however, Machaut seems to have settled in Reims, as a canon in "a house outside the clositers". He discharged his duties mainly in the Lady Chapel of the cathedral.

His post as canon was, however, no obstacle in continuing with duties to earthly masters. Following the death of his first employer and patron, John of Luxembourg, Karl II of Navarre was for some ten years his new patron. Subsequently Guillaume profited from the support by Amadeus VI, Count of Savoy, and the two sons of King Johannes II. These nephews of the King of Bohemia even became friends of the poet and composer. The elder was crowned king in Reims in 1364, the younger. Count Jean de Berry, was obliged to go into exile in England in 1360. This Count de Berry was one of the greatest bibliophiles and connoisseurs of the arts of his age. Among his possessions was the finest and most beautifully-bound of Machaut's manuscripts.

Most of Machaut's works date from after 1340, when his life had become somewhat less hectic. Between 1362 and 1365 a romance sprang up between the ageing composer, blind in one eye and plagued by gout, and the very youthful and aristocratic Peronelle d'Armantières. He exchanged love letters with her over a long period. Pilgrimages provided an excuse for the lovers to meet. From 1365 Machaut hardly left Reims again. He died there in April 1377 and was buried within the cathedral.

As a composer Machaut was all too soon forgotten. Too much had changed in the area of musical notation and compositional techniques. Only in the last century was it recognized that Machaut was not only a considerable poet, but a composer of genius, one of the great figures in all western music. He represents one of the first really significant composers with a discernible personality, creator of a "freely fantasized art" (H. Besseler) which is tied neither to church nor court. To the notational innovations and clear polyphonic structures introduced by Philippe de Vitry, Machaut brought significant innovations of his own, notably in the art of secular polyphonic song, quite apart from the great Messe de Nostre Dame, one of the first complete polyphonic settings of the ordinary of the mass.


The Messe de Nostre Dame is the most notable example of one of the first polyphonic mass settings. The Gloria and Credo are (except for the final "Amen") composed in accordance with Pope John's encyclical XXII "Docta sanctorum patrum" (1324-1325), and totally directed towards making the text comprehensible — in the spirit of a polyphonic conductus: syllabic treatment of the text, free melodic invention in all voices and an almost block progression of all voices in the same rhythm. All other parts of the mass are in direct contravention of the bull, with two agile upper voices hocketing away (from Old French hocqueter — to hiccup — musically, to break up a phrase with periods of silence). With the exception of the Amen in the Gloria, they are laid out isorhythmically; each part divided into individual sections, in which one or more of the voice parts are rhythmically similar, although differing melodically. This unobtrusive ordering of things, working away in seclusion, calls to mind the instinct for proportion found in gothic stonework. In the Middle Ages, the concept of composition still retained its literal sense (componere, to set together), setting voice on voice. The basis and foundation of the musical architecture is the tenor part (from tenere, to hold, so called because the note-values in this part are longer), the melodies are for the most part not freely invented, but prescribed by the traditions of the liturgy. The next step is the invention of a countertenor part, set "against" the tenor at a higher or lower pitch. Over this lower layer of voices came an upper part with more rapidly-moving notes, known as motetus, over this again, and likewise with shorter note-values, came the fourth and highest part, known as triplum. The two highest voices are mostly set isorhythmically, that is, the rhythmical structure is repeated, with some degree of freedom and variation.