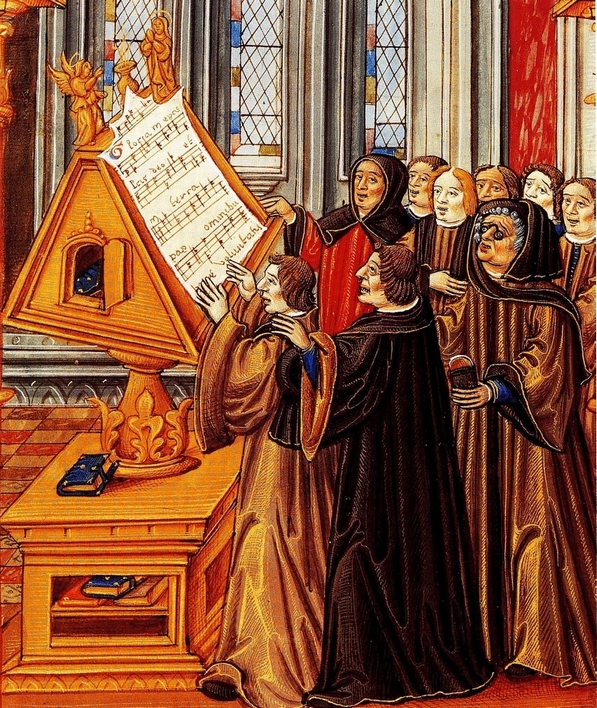 All the works on this recording, the last of The Clerks' Group's traversal of Ockeghem's complete sacred music, are thought to stem from the composer's maturity. As such, they must have been composed for the singers of the French royal chapel, which Ockeghem led for most of his working life.

The Masses Au travail suis and Sine nomine a5 are his shortest Mass settings, rivalled only by Cuiusvis toni (on CD GAU 189). Au travail suis is unique on account of its scoring for two high and two low voices roughly an octave apart. For most of the Mass Ockeghem divides them into different combinations of pairs pitted against each other. The starkness of these dialogues is smoothed by the equally melodic character of all four voices. The resulting interplay of textures, heard most clearly perhaps in the Credo, is typical of the composer. Unusual, too, is the Mass's relationship to its model, the eponymous song ascribed in one source to Barbingant, in another to Ockeghem himself. The song's tenor appears in full only in the Kyrie (where it is the last of the four voices to enter); thereafter, it is clearly heard only at the beginning of each movement, and again at the end of most sections, where it is heavily disguised. In between, the composer's fantasy has full rein: who can think of a more striking conclusion to a Mass movement than those of the Gloria or the Credo, or the arresting statements of "Hosanna in excelsis"? Au travail suis is one of the composer's most individual creations.

The even shorter five-voice Mass Sine nomine is a ferial setting: that is, it was designed to be sung on non-feast days when the court might wish to hear polyphony, and yet not prolong the service of the Mass unduly. The desire for brevity is evident throughout: the Kyrie lasts less than twelve bars. All three movements are based on plainchant settings; in the Credo, the Tenor voice (in the middle of the texture) can be heard reciting the very long text complete, but in very short notes, as though in imitation of a priest intoning plainchant at top speed. (Busy rulers were known to favour prelates who could get through the Mass in record time!) Like the composer's other surviving five-voice music (the Mass Fors seulement and the motet Intemerata Dei mater), Sine nomine is scored for low voices, including Bass parts reaching down to written C which might have been sung by Ockeghem himself. In many of these short Masses from the fifteenth century, not all the five movements of the Ordinary are set; so although it is possible that this Mass's Sanctus and Agnus Dei have been lost, it is just as likely that they were never written.

The three songs Petite camusette, Permanente vierge and Mort tu as navré combine several texts in the different voices. In Petite camusette, the top voice sings a courtly love poem in the form of a rondeau. Its long, flowing musical lines are in sharp contrast with the rather four-square music of the lower voices, who sing a popular song: "Robin and Marion go off to the woods and fall asleep...". The opposition between the complicated dilemma of the unrequited lover and the straightforward lovemaking of the peasants is a staple of 'polytextual' pieces since at least two centuries previously. There is an additional twist: the lower voices are in canon (that is, they imitate each other very strictly), so that this 'music of simple folk' is treated to the most sophisticated of musical techniques. This sort of irony reinforces the textual opposition, and would have been appreciated by Ockeghem's courtly audience.

Permanente vierge is a 'chanson motet'; there is again a French rondeau in the upper and lowest voices, while the middle ones carry sacred Latin texts sung to the appropriate plainchants. Here, however, the French text is clearly in praise of the Virgin, and of the Latin ones, Pulchra es derives from the Song of Songs, an Old Testament text whose erotic imagery was often interpreted in the Middle Ages as a prophetic reference to Mary. So the textual opposition of Petite camusette is inverted in Permanente vierge, with divine praise in the vernacular, and what was originally an amatory text as accompaniment. In its only surviving source, Permanente vierge is anonymous, but it has been placed between Petite camusette and Mort tu as navré, leading more than one scholar to suggest that Ockeghem may have been the composer. The Clerks' performance allows us to judge for ourselves: certainly it is a beautiful piece, in no way unworthy of him.

No such doubts exist as to the authorship of Mort tu as navré, which was written in commemoration of one of the leading composers of the preceding generation, Binchois (d.1460). Here the ballade text (which incorporates several uncertain passages) praises the deceased and even offers a brief biographical sketch, while the lower voices sing phrases apparently derived from the Office for the Dead, joining at the end for the phrase "Pie Jesu Domine, dona ei requiem". The mood is suitably subdued, but the choice of that most courtly and noble of poetic forms, the ballade, confers it dignity and grandeur, the inference that Binchois was a prince among musicians would no doubt have struck any contemporary audience.

Ockeghem may have provided for his own commemoration with the five-voice motet Intemerata Dei mater. Unusually for a composer of his generation, he appears not to have based it on pre-existing music; having said which, the beginning of the first and second sections allude to two of his songs (respectively, Presque trainsi and Fors seulement, the texts of which both declare a readiness for death), and through these, two of his Masses based upon them (Mi-mi and Fors seulement). With its kaleidoscopic treatment of vocal combinations, its often bold and pungent treatment of dissonance, its dark scoring and unerring formal sophistication, Intemerata is a fitting place both to begin and end this exploration of Ockeghem's art.


In 1993 when The Clerks' Group released its first recording of Ockeghem's music, I had little idea that we would go on to record the composer's complete sacred works. At that time I had been captivated by a small selection of his output: the Missa Ecce ancilla Domini which my colleague in The Clerks' Group, Matthew Vine, had introduced to me at college; the free-flowing quasi-improvisatory style of Intemerata Dei mater, and the famous Josquin lament on Ockeghem's death.

Since then, The Clerks' Ockeghem project has been propelled forward by our — and our audience's — enthusiasm for the music. In the same period a great deal of scholarly attention has been directed at this most eccentric of Renaissance composers, much of it published in and around the year of Ockeghem's quincentenary, 1995. And — for me, at least — a new kind of composer has emerged from all this work. For so long the object of respect rather than affection, Ockeghem's compositional technique is now appreciated as much for its breathtaking invention as for its control of complex puzzles, and as much for the sheer enjoyment of varied sonorities as for its densely-woven imitation. For me and for the members of the ensemble, Ockeghem has emerged as a singer's composer as well as a listener's composer, whose puzzles and whose piety are best understood from the inside.

Inevitably one's ideas about a piece of music change over time, and this goes for our recordings of Ockeghem as it would do for anything else. In particular, the music of the Renaissance allows a freedom of interpretation in areas not just of tempo and dynamic, but also in text underlay, application of musica ficta, scoring and choice of pitch. We therefore end this series of recordings as we began it, with Intemerata Dei mater, but this time at a pitch closer to the notated pitch of the manuscript sources, and with changes to the musica ficta and text underlay. I'm delighted to say that the motet — and especially its final riotous, tumbling bars — is still a thrill to sing.


Missa Au travail suis is performed from an edition transcribed and edited by Fabrice Fitch. All other works recorded here have been prepared for performance by Edward Wickham.