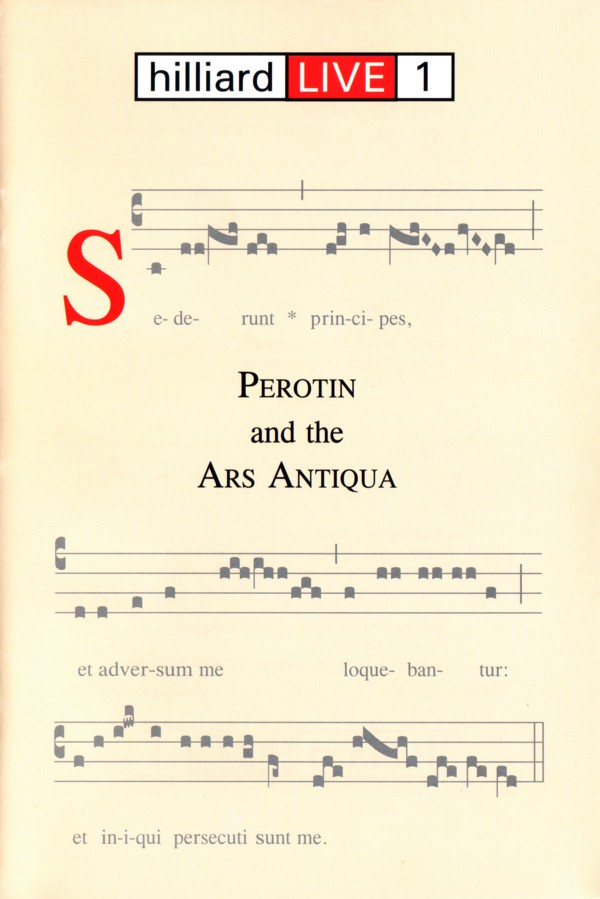 Welcome to the first issue of Hilliard LIVE.
We have always been aware that recording 'live' at a public concert was potentially much more exciting than working in a studio even though it brings the added risk of slight imperfections. We think this is a risk well worth taking.
So here is our first 'live' album, recorded at a concert we gave in Trinity College Chapel, Cambridge as part of our 1996 Summer School.
We are responsible for everything: the programme, the choice of engineer (our friend Chris Ekers who had previously worked with us on Officium concerts), even the design of the packaging.
Aside from the usual acknowledgements we would particularly like to thank the audience who were uncannily quiet during the recording. Apart from a distant motorcycle and some children playing outside the chapel there were almost no unwanted noises on the recording.

Recorded on 1 August 1996
in the chapel of Trinity College, Cambridge
by kind permission of the Master and Fellows


The history of late-twelfth-century polyphony was first written a hundred years after the event by a monk who may have come from Bury St Edmunds; history has not entrusted us with his name and he is usually referred to by the title he received when his treatise was first published in the nineteenth century: Anonymous IV. Anonymous as he was, he tells us about two of the most important composers of the fifty years either side of 1200: Léonin and Pérotin.

Léonin, we are told, wrote a cycle of two-part settings of the most important chants in the liturgical year - Christmas, Easter, Assumption and other feasts; this cycle was called the Magnus liber organi - the great book of organum.

Pérotin played an important role in the careful recasting and elaboration of this repertory. According to the monk from Bury St Edmunds, he either shortened or edited (interpretations vary) Léonin's great book of organum; long sections of almost improvisatory scope were rewritten according to the tighter principles of discant composition that Pérotin himself may have contributed to codifying. Perhaps more importantly, he set in motion the idea that settings of plainsong did not have to be in two parts. Greater rhythmic precision enabled the more complex coordination of three- and four-part plainsong settings. Pérotin's greatest fame rests on two works from the last decade of the twelfth century: settings of the graduals for the third mass on Christmas Day and the mass on the feast of St Stephen in four parts, Viderunt omnes and Sederunt principes. These works were quite possibly performed, respectively in 1198 and 1199, and represent the best guesses we have about fixed points in the chronology of the works of both Pérotin and Léonin organa, whether the two-part types that make up Léonin's Magnus liber organi or the four-part Viderunt and Sederunt are polyphonic settings of plainsong. The original chants employ two musical styles: the solo sections are elaborately melismatic and contrast with the simpler, more syllabic, sections sung by the schola. It is the melismatic solo sections of the chant that are set polyphonically. The result is that a performance of organum involves polyphony and plainsong.

Viderunt and Sederunt are both graduals and have the overall structure respond - verse - respond. Within each of these main sections are settings of both solo and choral chants; the respond consists of polyphony followed by the remainder of the chant, and the same pattern is followed in the verse, and of course in the return of the respond. Usually, the second respond is simply a repeat of the first one. However, in the case of Sederunt principes, the second respond is composed anew. On major feasts, when the gradual was followed by an alleluia, the repeat of the respond was usually omitted. In Paris around 1200, however, the practice was different. Léonin's organa dupla of the Magnus liber organi took the plainsong and did one of two things with it: for the more syllabic sections of the chant that he set, he laid out the lowest part (the tenor) in long notes and wrote highly elaborate, rhapsodic lines above it (the duplum). Alternatively, he took the long melismas of the chant and organised them into repeating rhythmic cells and wrote a correspondingly tight rhythmic duplum above it. The rhythmic organisation of this procedure gave rise to what are called the rhythmic modes. Both types of music exist within the same composition: the sections based on highly melismatic chants that use the rhythmic modes are called clausulae.

In three- and four-part organum the elaborate, rhapsodic dupla of Léonin's pieces are not practical because of the co-ordination of the three upper parts; all the polyphony is organised along the lines of the rhythmic modes. The differences between clausulae and the rest of the piece is that, in a clausula, the tenor moves at more or less the same speed as the upper voices and in the rest of the piece the tenor is deployed in long, sustained notes. Clausulae may be heard, for example, in Viderunt omnes on the word dominus and in Sederunt principes on the words [domi]-ne deus meus. The result of the exclusive use of the rhythmic modes in the three and four parts is that it frees up additional compositional resources, and it is perhaps one of Pérotin's greatest contributions to the history of music to have exploited imitation and even canon for the first time in these four-part compositions.

It used to be thought that the sustained notes in organum duplum, triplum and quadruplum were to be held relentlessly: a challenge to breath control and the sanity of the singer taking the part. Rereadings of thirteenth-century theory suggest that the tenor is responsible for contributing with great subtlety to the texture of the work by breaking the sound, at the same time as one or more of the upper voices, and this is the procedure that the Hilliard Ensemble employ in the recording here.

By any standards, Pérotin must have been an extraordinary composer. He wrote and revised organa in two to four parts, but also contributed to the other main genre that was cultivated in Paris around 1200: the conductus. Conducti were newly-composed settings of non-liturgical texts in Latin; they could be composed in anything from one to four parts. Pérotin's Beata viscera is a magnificent example of what the monk from Bury St Edmunds called a conductus simplex - a piece in one part only; This recording includes all three surviving four-part conducti: Vetus abit littera, Deus misertus and Mundus vergens alongside two three-part specimens: Veni creator and Procurans odium.

Conductus texts were non-liturgical, rhymed and constituted part of the corpus of medieval rithmi or accentual poetry. Their regular poetic structures give rise to regular phrase length, and their stanzaic structure is reflected directly in the musical setting in that the music for the first stanza is usually repeated for subsequent ones; this is the case for all conducti recorded here.

The subject matter for conducti varies widely, and has little relationship with the number of voice-parts or the musical style of the composition. The fist two four-part conducti, Mundus vergens and Deus misertus play off Old and New Testament imagery. In the case of Vetus abit littera, Christ's nativity is characterised by the replacement of the Old Law with the New Gospel with a passing allusion to Isaiah XL, 4; in Deus misertus, which deals with sin and the cleansing of sin, in the third stanza the poet alludes to the story of Elisha's failure to raise the dead boy when his servant, Gehazi, acted, and to how the boy was only restored when Elisha himself lay across the boy's body. Veni creator spiritus, on the other hand, extensively tropes odd words of the Pentecost hymn of the same title; and it focuses extensively on the sevenfold gifts of grace from the third stanza of the hymn. Mundus vergens is however topical; the poem, of which some stanzas may be missing, seems to refer to a period when France was experiencing a time of trouble after a period of peace although the final line of the third stanza - which continues a maritime metaphor - suggests that she does not lack a rudder. Commentators have suggested a variety of occasions to which this text might refer: Philip Augustus disagreements with Richard I after 1189, the Norman wars, the Battle of Bouvines, and so on.

There are two manners of performing conducti, and the recordings here exemplify both; they are termed isosyllabic and modal. In an isosyllabic performance, each syllable of the poetry is rendered approximately equal, and groups of two or three notes are fitted in accordingly; Deus misertus and Mundus vergens are performed this way. In a modal performance, the rhythmic modes familiar from the clausulae in organa are superimposed on the music in an attempt to reflect the perceived accentual qualities of the poetry. Veni creator and Procurans odium are performed this way; Vetus abit littera, because of its musical structure requires a hybrid treatment.

The decoration of plainsong with polyphony was as important to the embellishment of the liturgy as was stained glass to the windows of the cathedral whose name was appropriated by scholars looking for a peg on which to hang this repertory: the Cathedral of Notre Dame in Paris. Its certainly true that almost all the evidence surrounding and Pérotin's later contributions to Léonin's Magnus liber organi seem to centre on the cathedral and its immediate suroundings. The Hilliard Ensemble contrast this Parisian centrality of organa and conducti with works from the south-west of present day France and from England. The three-part setting of the alleluia for the feast of the Nativity of Blessed Virgin Mary, Alleluia. Nativitas, appears to have been composed in England and to have incorporated one section of the music of Pérotin's setting of the same chant; the text to this section was new; Pérotin's clausula: Ex semine is effectively troped by being supplied with a new text - Ex semine Habrahe / divino moderamine / ignem pio numine: From the seed of Abraham, by divine management you bring forth a fire.

The troped Gloria. Redemptori meo survives in Parisian sources but is here performed in an English version known only in a manuscript in Cambridge. This is a setting of the first few phrases of the Gloria interspersed with new text (the original is italicised)

and, as can be seen from the translation of this passage (Glory in the highest to God, / my redeemer, / man of Galilee, starlike one, / twofold majesty; and on earth peace to men, / but not to all. / To which, then? / To the faithful men of good will....) the poet makes the new text elide with the liturgical text of the Gloria.

Christus surrexit is a monophonic sequence from twelfth-century Aquitaine, and accompanies the sequence: Stirps Iesse. This is something of a curiosity. It is a monophonic sequence with a polyphonic Amen. This means that the six stanzas of the poem employ three musical units: the first for the first two stanzas, the second for stanzas three and four and the third for the last two stanzas. The austere monophony of this sequence is contrasted with the three part polyphonic Amen which is every bit as complex as the three-part discant produced by Pérotin and his contemporaries. The piece is found in a collection of hymns and sequences now preserved in a manuscript in the British Library in London. Among these monodies are eight monophonic sequences which end with polyphonic Amens. All are in two parts with the exception of Stirps Iesse, recorded here. This copy of the piece seems to date from around 1300, and is notated in the precise notation associated with the end of the thirteenth century. Like Christus surrexit, it originates in the south west of France, perhaps from around Périgueux. 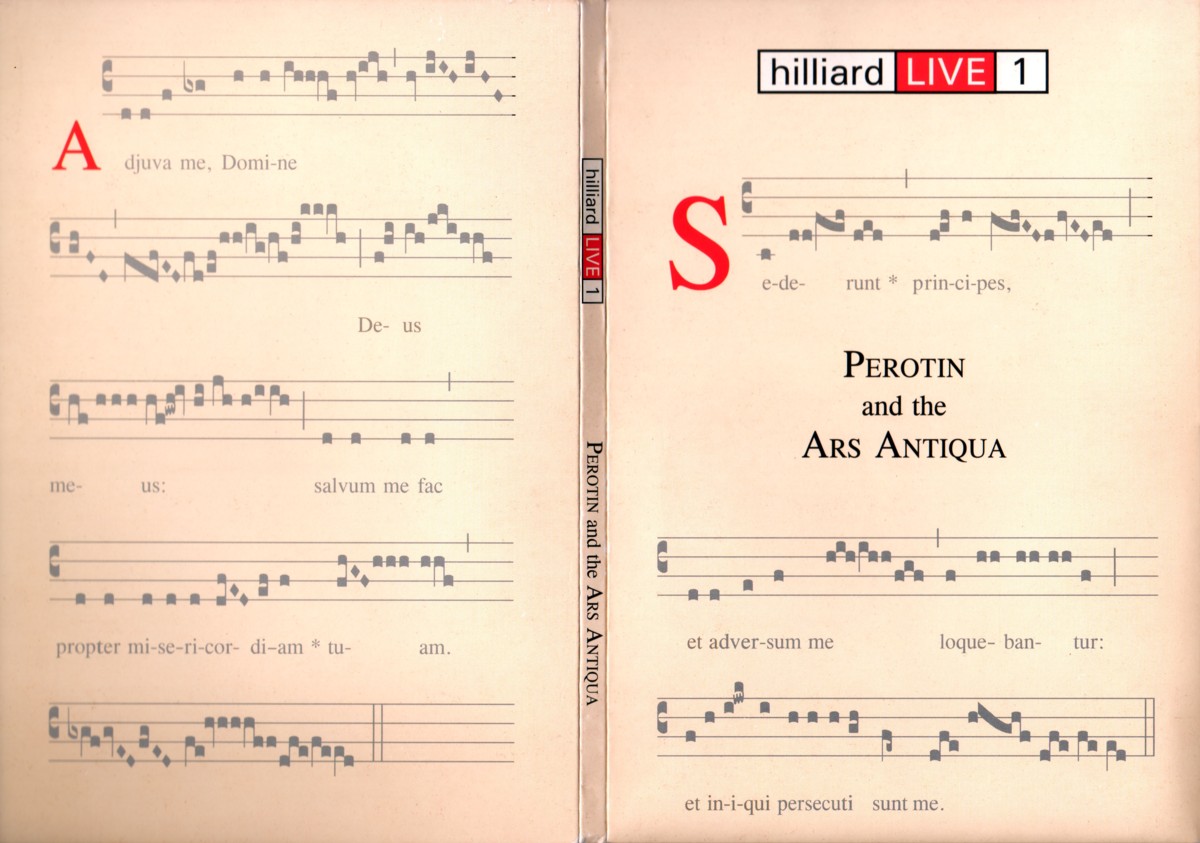