Istanpitta was formed by Al Cofrin during the summer of 1994 as a means to perform interpretations of medieval dance music developed as part of a college thesis project at the University of Texas. Eventually the ensemble was performing regularly across the United States at venues geared towards early music. The main core of the group comprises the use of the medieval lute, vielle, bagpipes, recorder, percussion and voice.

Their performances present the music in a manner that medieval musicians (who were somewhat low on the social scale) might have played them when performing for their next meal as they traveled from place to place across Europe. This includes incorporating many Arabic styles that were possibly familiar to the Medieval ear due to the occupation of southern Spain by the Moors from the 8th century through the 15th century, and the interaction with Middle Eastern culture
during the Crusades.

The theory here is that these musicians, like modern day jazz players, would not have limited themselves to the written or learned version of a tune but would have modified it in ways to make it their own. Many times this was done accidentally because many musicians were illiterate, and variations of a dance or song were recalled differently from one performer to another.

Istanpitta's interpretations of these songs and dances are meant to represent not the static literary versions (the words and music most likely transcribed onto parchment by a monk or nun) but the dynamic historical reality of the "musician in the field" (the piece of dirt who actually played it).

Istanpitta has previously produced two CD' s. "C'est la fin" which is a collection of French and Italian songs and dances from the 13th and 14th centuries; and "Chevrefoil," the story of Tristan and Isolde and their ill-fated love. "Pilgrimage to the Shrine of Saint Mary" is Istanpitta's latest recording effort encompassing songs from two of the most famous Medieval Spanish manuscripts woven together in a tapestry of music and tales of the Blessed Virgin. 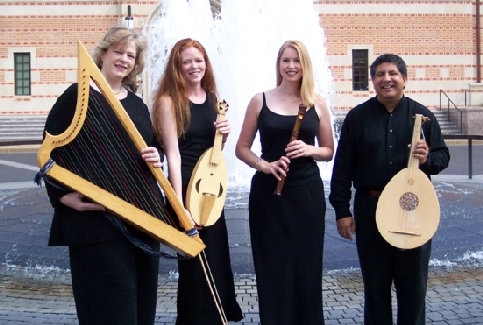 "Pilgrimage to the Shrine of Saint Mary" is a collection of songs about Saint Mary and the Miracles she performed in Spain. It is told by travelers making their way to the annual Christian celebrations in various parts of Spain dedicated to the Blessed Virgin. Many stories of miracles performed by Holy Mary were exchanged among these travelers during the middle ages.

During the mid-13th century, King Alfonso X ruled over large portions of Spain, which he had recaptured from the Moorish nations. By the time Alfonso inherited the thrones of Castile and Leon in 1252, he was already considered a wise scholar. His court became a centre for research, knowledge, and the arts, which was characterized by a rare open-minded fusion of three existing cultures in Spain: Christian, Jewish, and Islamic. Although a devout Catholic, Alfonso relied heavily on his Jewish advisors, and employed Moorish musicians known as mudejars. Alfonso's best known legacies to history are the written collections of knowledge in areas of astronomy, astrology, games, and music, as well as numerous other minor works. Of these collections, the most famous is the Cantigas de Santa Maria, a compilation of 427 songs in honour of the Virgin. Although Castilian was the official language at the time, the Cantigas were written in Galician, or Gallego-Portuguese, which was considered a more courtly language and better suited for artistic poetry. The subjects of the Cantigas range from songs of praise, historical incidents, and moralistic stories, to numerous tales describing miracles performed by Holy Mary. The miracles recorded are not exclusive to Christians, but also involve both Moors and Jews alike and many are pointedly satirical in nature.

Many of the songs are believed to be the product of a process known as "contrafacta", which involves taking a pre-existing melody and providing it with new words. A good example of this process is the early American song, The Battle Hymn of the Republic, and uses the melody from a song called John Brown's Body (and later went through another transformation to become the high school favourite Glory, Glory, Hallelujah, Teacher hit me with a ruler). Some scholars believe that many of the melodies used for these Cantigas were more than likely Moorish folks songs commonly sung by Islamic Moors who chose to stay in Christian-occupied Spain. The Cantigas are beautiful and lyrical and provide an excellent example of combining the Christian and Islamic traditions. We hope you enjoy listening to this recording as much as we enjoy performing this music.