Instruments of the Middle Ages and Renaissance
The Early Music Consort of London, David Munrow Instruments of the Middle Ages and Renaissance


These records are designed to illustrate the principal types of instrument in use in Europe before 1600. They have been carefully planned in conjunction with the book included in the box: both follow the same sequence so that book and records may be used together. Those wishing to listen to the records straight through may like to simply follow the pictures from the book; alternatively the listener may prefer to read the section on any particular instrument first, followed by the relevant musical illustration.

The illustrations themselves have been chosen to demonstrate as far as possible the function, range and special characteristics of each instrument. In the Middle Ages the accent is on solo pieces, sometimes with a suitable accompaniment; in the Renaissance the emphasis is more on the development of the complete soprano-to-bass consorts. Although many early wind instruments have no specific repertoire of their own, some unusual examples of specific instrumentation have been included, for instance the pieces by the Monk of Salzburg evidently intended for primitive horns and trumpets (S.2, B.1a, 2b and 2d), Johann Schein's Paduana for four crumhorns (S.3, B.4) two of the chansons from Attaingnant's 1533 collection which are marked as suitable for flutes or recorders (S.3, B.8 and 9) and Monteverdi's famous Toccata for trumpet band from Orfeo (S.4, B.1). Whilst some of the leading composers of the day have been included (Landini, Machaut, Dufay, Byrd, Dowland, Frescobaldi, Monteverdi, Praetorius) these records seemed an excellent opportunity to feature some of the lesser known composers as well. As far as possible the illustrations consist of complete pieces of music; in one or two cases, however, extracts or abridged versions have been used.

In order to keep within the time limits imposed by two gramophone records, a few of the more obscure instruments described in the book have regretfully had to be omitted. Others are included in ensembles rather than being given a solo to themselves (e.g. the courtaut, S.3, B.10, and the chitarrone, S.4, B.5). This is the case with all the non-melodic percussion instruments, since their main purpose is to provide some kind of rhythmic accompaniment; the listener will find the relevant illustrations to chapter 5 spread over all four sides of these records. A list of the percussion instruments illustrated is included in the side analysis.

In the details of the instruments and their makers given below, dates are provided only for original instruments. Where no such information is given, the instrument concerned is a modern replica or reconstruction. On the first two sides a number of folk instruments have been employed, as being the nearest equivalent to their mediaeval ancestors. Instruments which have been in continuous use since the Middle Ages such as the shawm, hurdy-gurdy and straight trumpet provide an invaluable link with the live sounds of the past which is missing even in the case of surviving original instruments.


(For the later European type of shawm with pirouette instead of disc see S.2 B.2 last item)


(More extended mediaeval dances for both six-holed pipe and recorder can be heard on ‘The Art of the Recorder’, SLS 5022)

13. Positive organ
ESTAMPIE from the Robertsbridge fragment   [2:17]      ENGLISH c. 1320
(only two of the original four puncti or sections are played here, in the form AAB)


(Other examples of mediaeval organ music, including another piece from the Robertsbridge fragment,
can be heard on 'The Art of Courtly Love', SLS 863)


(For the citole used as an accompanying instrument see S.2 B.12) 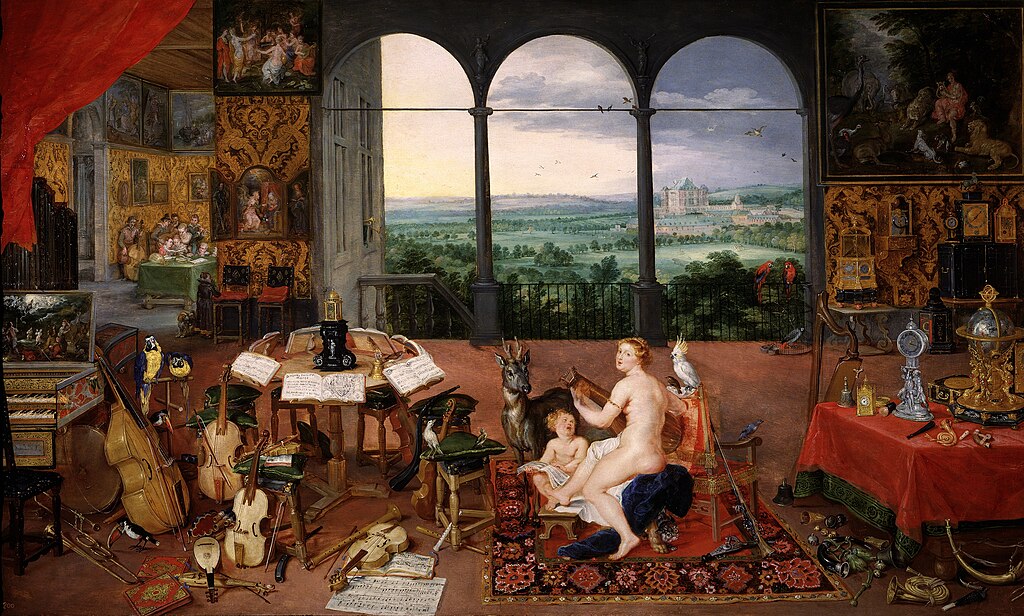 
(For the tenor curtal as a continuo instrument see S.4 B.3)

Courtaut
A bass courtaut can be heard playing with a consort of recorders on S.3 B.10


(For the quart-bass rackett supporting a mixed ensemble see S.3 B.15)
(A consort of racketts can also be heard on ‘Music by Praetorius’ CSD 3761)

9. Recorder (a) 8' Consort
CHANSON ‘HELLAS ! AMOUR’   [2:12]      GUILLAUME LE HEURTEUR (FIRST HALF OF THE 16TH CENTURY)
from Pierre Attaingnant's second book of Chansons musicales 1533
(This piece is marked by Attaingnant as being suitable for either recorders or flutes)


Paul Bernard playing the organ of the church of Santa Maria, Daroca, Spain, built in 1562.

(For the smaller positive organ as a continuo instrument see S.4 B.2, 3 and 5)

Christopher Hogwood   virginals   (Copy by Derek Adlam, Goudhurst, Kent, of a virginals dated 1611 by Andreas Ruckers now in the Vleeshuis Museum, Antwerp. The Arpichordum stop, based on the description by Praetorius in his Syntagma Musicum Vol II, 1619, can be heard in the last two variations)

(For a sackbut in a mixed ensemble see 8.3 B.7)
(Mixed consorts of cornetts and sackbuts can be heard on ‘Two Renaissance Dance Bands’ HQS 1249
and ‘Music of Praetorius’ CSD 3761)


5. Serpent
CANZONA QUARTA for ‘BASSO SOLO’   [2:15]      GIROLAMO FRESCOBALDI (1583-1643)
from the Canzoni da sonare, 1643 (described in Il primo libro of 1628 as ‘Canzona settima detta la Superba’)
(For the purpose of this recording a shortened version has been made
omitting a section in the middle of the canzona)

Chitarrone
(For the chitarrone used as a continuo instrument see S.4 B.5)

(One side of ‘Two Renaissance Dance Bands’ HQS 1249 is devoted to music for
the typical ‘broken consort’ of viols, recorder, lute, bandora and cittern,
many of the pieces being taken from Thomas Morley's First Book of Consort Lessons, 1599)


(For the violin in an ensemble see S.4 B.8)
(Mixed ensembles of violins, viols and violone can be heard on
‘Two Renaissance Dance Bands&rquo HQS 1249 and ‘Music of Praetorius’ CSD 3761)

Many of the instruments heard on these records can be heard in mixed vocal and instrumental pieces on the other recordings by The Early Music Consort of London directed by David
Munrow:

The Art of the Recorder — SLS 5022
Recorder music from the i3th century to the present day
with the David Munrow Recorder Consort
Norma Burrowes, James Bowman, Martyn Hill, Robert Lloyd

Praetorius: Dances from Terpsichore (1652)
Motets from Musae Sioniae — CSD 3761
with Boys of the Cathedral and Abbey Church of St. Alban

Henry VIII and His Six Wives — CSDA 9001
Music arranged, composed and directed by David Munrow for the Anglo EMI film

INSTRUMENTS OF THE MIDDLE AGES AND RENAISSANCE

When he died in May 1976 at the age of thirty-three, David Munrow left a recorded legacy that, in its breadth, depth and importance, rivalled and even surpassed that of many more senior figures. It ranged from the twelfth century to the high baroque, encompassing instrumental and vocal works, and including in later years the masterpieces of renaissance vocal polyphony. Yet instrumental music was always central to Munrow, a virtuosic player as well as director of the Early Music Consort of London, and a compulsive collector of musical instruments from around the globe.

One of his final and most ambitious projects was this recorded survey of musical instruments of the medieval and renaissance eras, originally accompanied by a lavishly illustrated 90-page book researched with all his typical thoroughness. The ordering of the recording follows that of the book. In each period, the instruments are organised according to type: woodwind, keyboard, brass and strings. Within these sections are further subdivisions: for instance, in the woodwind category reed instruments (open reeds such as the shawm and 'capped' reeds like the crumhorn, as well as bagpipes) are followed by flutes (including pipes and recorder), whilst plucked strings like the harp, lute and guitar
are treated before bowed strings like the rebec, viol and violin. Alongside these more familiar instruments are some less well-known ones, most notably the tromba marina (CD1: 30) which, despite its misleading name, is a long, wooden, triangular-bodied, bowed instrument with just one or two strings. Its distinctive sound is the result of it playing only harmonics (with the player touching the string very lightly with fingers of the left hand), together with a specially designed vibrating bridge which produces a pronounced raffling sound.

Whilst some instruments are heard solo (like the reed pipe), others are accompanied (bladder pipes) or heard in ensemble - the latter increasingly the case in the many renaissance works designed for consort performance. Different examples of certain instruments are also heard: bagpipes with a cylindrical chanter (i.e. a straight-bored pipe) and a conical one (opening out into a bell, like a trumpet or horn), and a metal-strung harp contrasted with a gut-strung one. The two juxtaposed performances of the Toccata from Monteverdi's Orfeo (CD2: 16) provide a vivid illustration of how the long trumpet mutes of the time were inserted so far up the instrument's bell that they raised its pitch by a whole tone.

As well as playing many original instruments or modern copies, Munrow and his musicians do not hesitate to make use of folk instruments from around the world in cases where he felt that these were the closest sounding equivalent of obsolete instruments. Thus the medieval buisine (a metallic ceremonial trumpet up to six feet in length) is represented by a pair of traditional long birch-bark trumpets of the sort still used by Swedish shepherds. To illustrate the dulcimer, an Italian madrigal by Jacopo da Bologna is performed on a traditional dulcimer from Hong Kong together with a rebec adapted from a Yugoslav folk instrument.

Musicological purists have tended to look rather sniffily on such liberties, and 'expert opinion' now usually favours a purely vocal approach in many of the medieval works Munrow treats here instrumentally. Yet what we know about the actual performance of this music and these instruments in their own time remains tantalisingly little (very few examples of purely instrumental music survive from the middle ages), and Munrow was never one to allow the actual performance of music to be inhibited by scholarly caution. His bold approach in this ground-breaking survey, featuring a combination of innate flair and consummate musicianship previously rare in performances of this repertoire, justifies itself by its continued ability to excite and communicate: such qualities never go out of fashion. Who else would dare come up with the startling combination (CD1: 7) of six-holed Peruvian folk pipe and Jew's harp for a monophonic French chanson? As Munrow himself pointed out, the crucial missing 'instrument' here - the human voice - is the one against which the tonal qualities of all the others were judged, and to which many of them aspired. In that respect alone, Munrow's selection of music - as wide and varied as the types of instrument demonstrated - seems still a wholly appropriate and inspired one.