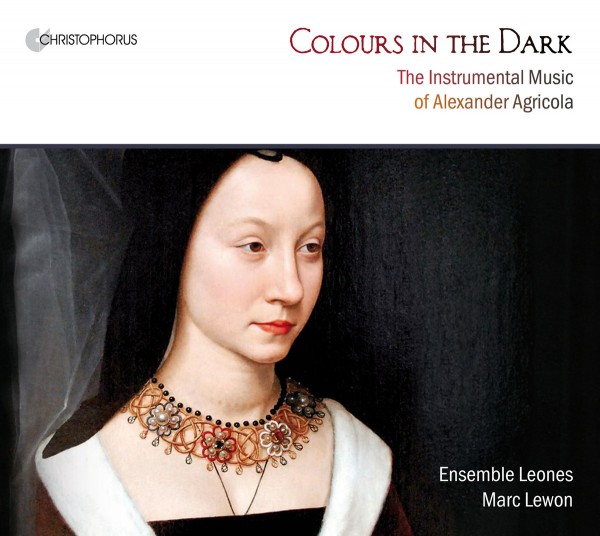 I would like to dedicate this recording to my teacher and friend Crawford Young,
whose enthusiasm for Agricola’s works inspired my own studies of this composer.
I want to thank him for communicating his knowledge and for participating in the present recording.
Marc Lewon

Alexander Agricola (c. 1456-1506) seems to have taken pleasure in enigmas; not the enigmatic canons favoured by other composers of his day, but the sort of games that ask questions of the acts of performing and listening — that is, interpretation in every sense of the word. Even the titles of some of his pieces hint at this intention: Pater meus Agricola est is a quotation from St John’s Gospel, but it can also be read as a signature (‘my father is a farmer’), ‘Agricola’ being the Latinized form of the composer’s patronymic, ‘Ackerman’. The title of Cecus non iudicat de coloribus is still more gnomic: ‘the blind man cannot distinguish colours’. So much ink has been spilled concerning the possible meaning(s) of this title, and so often has it been recorded under Agricola’s name, that it’s worth pointing out that its many sources ascribe it to different composers, which of course presents us with another enigma. But apart from the style of the piece, which fits Agricola’s securely attributed pieces, one might observe that the title itself (however it originated) also fits the enigmatic image that the composer appears to have cultivated. Hence, his authorship of Cecus has rarely been questioned. In fact, Pater meus and Cecus are cut from the same cloth: disguised repetitions are heard (or not), ostinatos begin or end with no clear signal, short points of imitation, and other intimations of process, come and go. For a modern audience, used to the ars perfecta of Josquin or (later) Palestrina, Agricola’s style can seem obscure, diffuse, even rambling. A more positive view might be that where a Josquin leaves no tone unturned, so to speak, Agricola leaves open the suggestion of all the material’s ‘might have been’s’.

Agricola’s career was typical of the most successful composers of his time: early education as a choirboy in his home town of Ghent where he was born (probably in the mid-1450s), followed by early peregrinations between relatively junior posts in Northern France, which led him to the French royal chapel, where he would have sung under Johannes Ockeghem, the most famous composer then living. It’s not known when Agricola arrived there, though it’s likely to have been some time in the 1480s; but Agricola’s penchant for the enigmatic and his play with musical style are both traits evident in the work of the elder composer, which suggests that his stay may have been a decisive factor in his compositional development. In the early 1490s he left the court for Italy without leave, and the king himself exerted considerable pressure to get him back. Whether he succeeded isn’t known, though it’s not impossible, for the court’s documents from this period are patchy. What is known is that Agricola did spend some years in Italy (once again, a typical pattern), perhaps returning to Ghent in 1499 to help settle his late mother’s estate. (In the matter of parentage Agricola’s biography is exceptional, for Lijsbette Naps was an independent, successful and unmarried businesswoman, who enjoyed considerable esteem despite conceiving both Alexander and his brother Jan out of wedlock.) The following year he was appointed at the court chapel of France’s great rival, Habsburg Burgundy, a move that would have allowed Agricola to plan for retirement in his homeland. Poignantly, this likely plan came to naught, for he died suddenly at Valladolid (or possibly nearby, at Ribera del Duero) during the second of the court’s visits to Spain, in mid-August 1506. His death coincided with a virtual explosion in the dissemination of his music in both manuscripts and printed sources in the years immediately before and after: one wonders what his already considerable posthumous reputation might have been had he been spared a decade more.

Agricola left a substantial, but by no means enormous body of work, including several Masses, motets, and a more important volume of chansons. Although his discography in the last decade has grown more representative of his output as a whole, his name has been associated in modern times with a considerable number of pieces that seem to have been conceived without text, such as the Pater meus and Cecus mentioned earlier; and it is on this repertoire that the present recital focuses. Pater meus and Cecus are exceptional in being particularly extended, and entirely freely invented (so far as is known). More typical are the shorter compositions based on a pre-existing line from a well-known chanson, a genre to which Agricola is the single most important contributor. One example is the very popular Dutch song T’Andernaken, which is heard with its full text just before Agricola’s setting. In the case of the mid-15th-century smash hit De tous biens plaine by Hayne van Ghizeghem, no fewer than five settings for three voices survive from his pen, of which four are presented here. Hearing them in close succession and in close proximity to the original chanson (with the tenor voice that Agricola borrowed here sung) allows one to appreciate the range of Agricola’s invention. His two re-workings of Walter Frye’s Tout a par moy (likewise alongside the original) form another set. The four-voice version is especially remarkable for the use of a four-note ostinato in each of the piece’s two halves (played here on the bray-pin harp), each corresponding with the opening pitches of the respective half of Frye’s tenor – all this while Frye’s complete tenor unfolds in another voice. The final statement of the ostinato results in a mischievous false relation. Another set, in which the cornetto predominates, allows us to hear a number of freely-composed songs whose texts survive only as a fragment.

Two other tenor-settings are included here more speculatively. The four-voice Du tout plongiet, based on the tenor of Ockeghem’s Fors seulement l’attente que je meure, is ascribed in several (possibly related) sources to Agricola’s contemporary Antoine Brumel, but it also appears under Agricola’s name in Petrucci’s Canti C of 1504. While space does not permit a full exploration of the question, Petrucci’s testimony is at least worth considering, for the setting has numerous points of contact with Agricola’s style; hearing it in the company of his securely ascribed settings presents a fresh opportunity to consider the matter. Fewer doubts obtain in the case of the four-voice setting of the tenor of Du Fay’s Le serviteur, which appears in its only source amongst a clutch of pieces that are certainly by our composer. This circumstance, coupled with the piece’s style, makes his authorship all but certain, but only recently has it appeared in an accurate edition, which has made this first performance on disc possible.

Agricola’s music abounds in games that have musical style as their object: cadences in particular are treated to all manner of tricks, sometimes appearing so close together that they cease to function as stable points of arrival (as in his Le serviteur), and at other times being undermined in a variety of ways. In his treatment of this most fundamental of musical building-blocks, Agricola (like his possible mentor, Ockeghem, but in a very different way) pushes the musical style of his time in unexpected directions. But he was not alone in courting extremes. A couple of pieces are included on this recording whose manner is related to his in spirit: first the wonderfully zany two-voice setting of De tous biens plaine (by the otherwise unknown Roelkin), whose free voice scurries up and down two-and-a–half octaves; and second, the anonymous two-voice Le serviteur (which sets not Du Fay’s tenor, but his top line) whose free voices behaves quite classically for about half the piece’s duration, before embarking on a series of rhythmic proportions of increasing speed and complexity (from 3:2 to 10:2). Some scholars have tended to regard pieces like this as exercises in rhythmic notational theory, or worse, dismissed them as a sort of ‘paper music’, demonstrations of intellectual sophistication not intended for performance. Such a view projects onto this repertoire a set of well-rehearsed modern prejudices: for a long time, after all, the music of the ars subtilior period was tarred with a similar brush, until performers appeared who were able to master its rhythmic complexity and, moving beyond the notes, project the sense of line, poise, and pacing that characterises the best of such pieces. Not coincidentally, composers and performers of twentieth-century music were themselves exploring music of increasing complexity, and while that trend itself has itself aroused controversy, it has created to a context within which the rhythmic abandon of these late fifteenth-century duos may be appreciated more sympathetically than at any time since their composition. The same might equally be said for Agricola’s music.


About the agricologies, and Agricola VIII and IX

My own contributions to this recording are part of a wider project, a multi-volume cycle entitled agricologies, that attempts to project Agricola’s sense of play, and his inventive treatment of borrowed material, into a contemporary context. In the two pieces commissioned by Ensemble Leones, I have dispensed with a score, since these musicians are used to performing music from a time when scores were also superfluous: none the less, there are for both pieces sufficiently precise instructions as to the co-ordination of the parts. Agricola IX is the first piece of the agricologies to include a wind instrument. The pitch-material for the cornetto muto part is taken from the opening bars of Ockeghem’s four-voice rondeau Je n’ay dueil. Agricola based his own rondeau, Je n’ay dueil qui de vous ne viengne, on the very short opening phrase of its lowest voice; I therefore incorporated the opening phrases of the other three voices in my own piece. Some of these are compressed into quarter-tones, which allows the bray-pin harp and the three accompanying strings to comment on the material using a combination of split frets (viole d’arco) and a modern viola bow (harp), which is used in various ways. The challenge of using early instruments, it seems to me, is to imagine how they might be used today had they never fallen out of fashion. Agricola IX is perhaps the most far-reaching piece of the set, from this point of view at least. It is dedicated to Martin Iddon and Kate Whittaker.

Agricola VIII is drawn from the material of Agricola’s perpetuum mobile piece De tous biens plaine II (which appears on this recording), tonally compressed fragments of whose moto perpetuo material are redistributed between four unspecified plucked instruments (two of which function as a pair, here a viola d’arco and a Renaissance violin, the two other individual parts being played on a lute and another viola d’arco). I wrote this setting in 2010 as a gift for my friend and mentor, the musicologist David Fallows. The following year I visited him at his home in Basel, where I saw the famous Tinguely-Brunnen for the first time. Immediately came the wish to write a piece around them, but when I returned a few months later to attend the recording sessions for this disc, I realized, to my surprise and delight, that I already had. I wish to thank Marc Lewon and all the musicians of Ensemble Leones, for the generosity and open-mindedness that characterised our work together. I hope that something of that purposeful playfulness comes through in the music.