Russell Oberlin, The Thomas Hunter professor of music emeritus and director of the Collegium Musicum at Hunter College, is an internationally acclaimed singer widely recognized as America's foremost countertenor. A graduate of the Juilliard School of Music, Oberlin was a founding member of the legendary New York Pro Musica. He had recorded extensively, given recitals, and appeared as soloist with leading orchestras throughout this country and abroad. Operatic roles include appearances at the Royal Opera House, Convent Garden, where he sang the part of Oberon in the London premiere of Benjamin Britten's “A Mid-Summer Night's Dream." A senior Fullbright research scholar, Oberlin had taught and lectured extensively in the U.S. and England.


Music of The Middle Ages
Volume 2 - The 12th Century 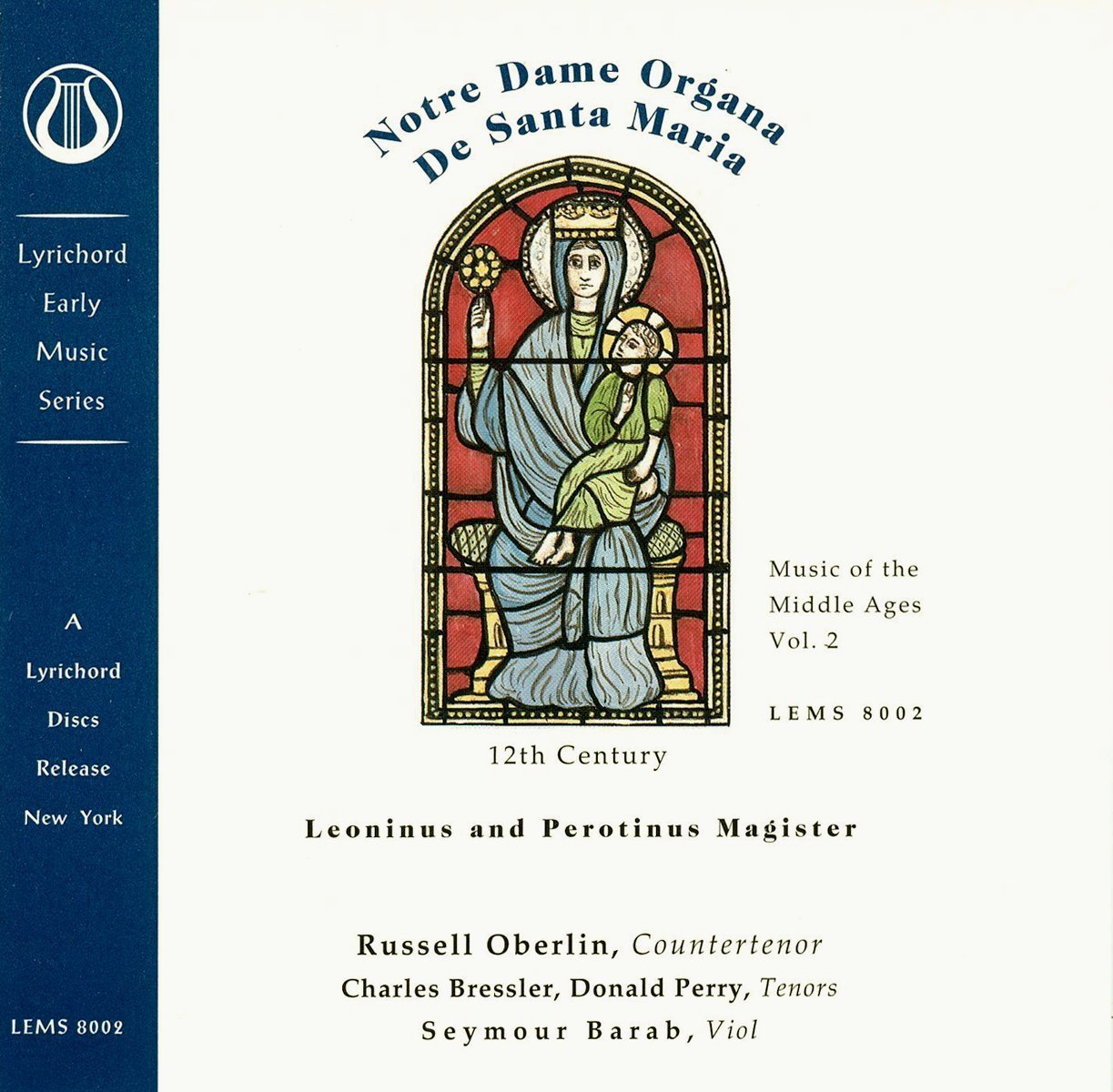 
Almost eight centuries have elapsed since Maurice de Sully, Bishop of Paris, began the construction of the Cathedral of Notre Dame. Even before the first stones had been laid, this consummate tribute to the Mother of God had begun to dominate the city of Paris. A road had to be broken through the crowded quarters of the city to facilitate the transportation of the building materials; the ancient basilica of St. Stephen, once the grandest edifice of the fortified island of Paris, was now converted into a workshop for the masons whose meticulous handwork was to be carried across the square and assembled upon the former site of the church of Our Lady, which had originally been only a dependent chapel of mighty St. Stephen's across the way. Now, under the watchful eyes of the Bishop Maurice and his successor Eudes de Sully, the vaulted spaces and soaring buttresses of the new cathedral began to form against the sky the silhouette which has ever since been the image of Paris that all its inhabitants and visitors have carried in their hearts.

The bustling activities of the masons and architects attested the growing importance of this sanctuary of the Virgin Mary, but so did the schools, which had sprung up in the shadow of its walls. From every European nation students flocked to the schools clustered in the narrow streets and cloisters surrounding the cathedral. Here theologians and grammarians gathered to impart their knowledge of sacred and secular literature to the hordes of eager students. An intellectual ferment was taking place in the vicinity of Notre Dame and, even before the cathedral had been completed, its schools had been
transformed into the University of Paris.

In the twelfth and thirteenth centuries the Cathedral of Notre Dame had become the focal point of intellectual Europe and its stones still stand as testimony of the visions and aspirations of this age. Its portals tell with their sculptured friezes of a hierarchic world order in which every being has its place; its symmetrical facade and ordered interior space portray a world where all is regulated by consonance and proportion. Indeed the Cathedral of Notre Dame, like other masterpieces of Gothic architecture erected in this same period, still sings the silent hymn of the men who created it, a paean of praise to a universe framed in musical proportions and linked from extremity to extremity by the harmonizing force of musical numbers. But while Notre Dame even today bears mute witness to the medieval conception of a musical cosmos, the music, which once echoed from its walls and which by its very nature embodied in its tones the harmonies of the macrocosm and microcosm, has long since vanished and been forgotten. It is the great merit of the present recording that it restores to our age some of the compositions that were written expressly for performance in Notre Dame in the very years in which the cathedral was conceived and executed.

Some time around 1160 Leoninus of Notre Dame completed his grandiose plan of providing polyphonic settings for the responsorial chants of the Mass and Office for the major feast days of the church year, a project which in its own way was as magnificent as Maurice de Sully's plans for the new cathedral. Thirty years later Perotinus, the successor to Leoninus, created new settings of certain portions of the works of Leoninus, but also provided totally new versions of some of them which he composed for three and even four parts as opposed to the two voiced compositions of Leoninus. Both composers, however, consistently set only those parts of the chant that are normally performed by the soloists, leaving the remainder of the chant to be performed in the usual way by the choir. Of the many pieces of organum written by these two men (organum being the contemporary term of polyphonic settings of the chant) this recording provides us with four by Leoninus: the Gradual 'Viderunt omnes' for Christmas Day, the 'Alleluya, Epulemur in Azimis' for Easter Sunday, the Gradual 'Propter veritatem' for the Feast of the Assumption, and the Responsory 'Gaude Maria' for the Annunciation of the Blessed Virgin Mary; and two by Perotinus; the ‘Alleluya, Nativitas' for the Nativity of the Blessed Virgin Mary in a three part setting, and the Gradual 'Sederunt principes' for
the feast of St. Stephen in a four part setting.

Although we know as little about the lives of Leoninus and Perotinus as we do about the first master architects of Notre Dame Cathedral, their music speaks as clearly of their ideals as does the lofty structure envisioned by the Bishop Maurice and his architects. Here is music, which is wholly conditioned in its harmony and in its rhythm by the medieval reverence for the numerical proportions, which regulate musical consonance. A long tradition extending from the Pythagoreans through Plato and St. Augustine had transmitted to these men the idea that the universe had been formulated in numerical proportions that held everything in its proper place from the crystal spheres of heaven to the ebb and flow of the tides and the virtues that adorn the soul of man. These proportions are specifically those that produce the musical intervals of the unison (1:1), the octave (1:2), the fifth (2:3), and the fourth (4:3). Thus the composers of this period dwelt upon the harmonies formed by these proportions, driving the melodic lines which they added above the melody of the chant from one perfect interval to another, beginning and ending their phrases with intervals which formed such a perfect relationship with the notes of the Gregorian chant. Even the rhythmic system introduced by Leoninus and furthered by Perotinus reflects the same veneration for proportion. This is a rhythm created by the repetition of a rhythmic pattern or mode. The pattern is a constant, containing a specific temporal relationship between its two parts, e.g. the first mode, consisting of a quarter note and an eighth, preserves the proportion 2:1; the second mode, consisting of an eighth note and a quarter, adheres to the proportion 1:2, etc. Rhythm is, then, a measurement of time by means of a module or pattern, which contains within itself a never-altering proportion.

Thus the music of Leoninus and Perotinus conveys to us the medieval love of proportion. We hear it alike in the spare, sinuous melodies of Leoninus and the driving rhythmic intensity of Perotinus; in the sequential phrases of Leoninus' 'Propter veritatem' and the interchange of musical phrases between the voices of Perotinus' 'Sedemni.’ It exits in the long organ-points, when the sustained tone of the change conditions the melodic progression of the added parts through the intervals generated by the possible proportions with this tone; and it is audible as one becomes aware of the composer's endeavor to reinforce the initial tone of the rhythmic pattern with a harmonic consonance. This indeed is music worthy of the great cathedral for which it was composed.

1. Viderunt omnes fines terrae salutare Dei nostri: jubilate Deo, omnis terra.
Notum fecit Dominus salutare suum; ante conspectum gentium revelavit justitiam suam.
All the ends of the earth have seen the salvation of our God; sing joyfully to God, all the earth.
The Lord hath made known his salvation; he hath revealed his justice in the sight of the Gentiles.

5. Alleluya. Nativitas gloriose virginis Marie ex semine Abrahe orta de tribu Juda dare ex stirpe David. Alleluya.
Alleluia. This is the nativity of the glorious Virgin Mary, of the race of Abraham, of the tribe of Juda, of the illustrious family of David. Alleluia.