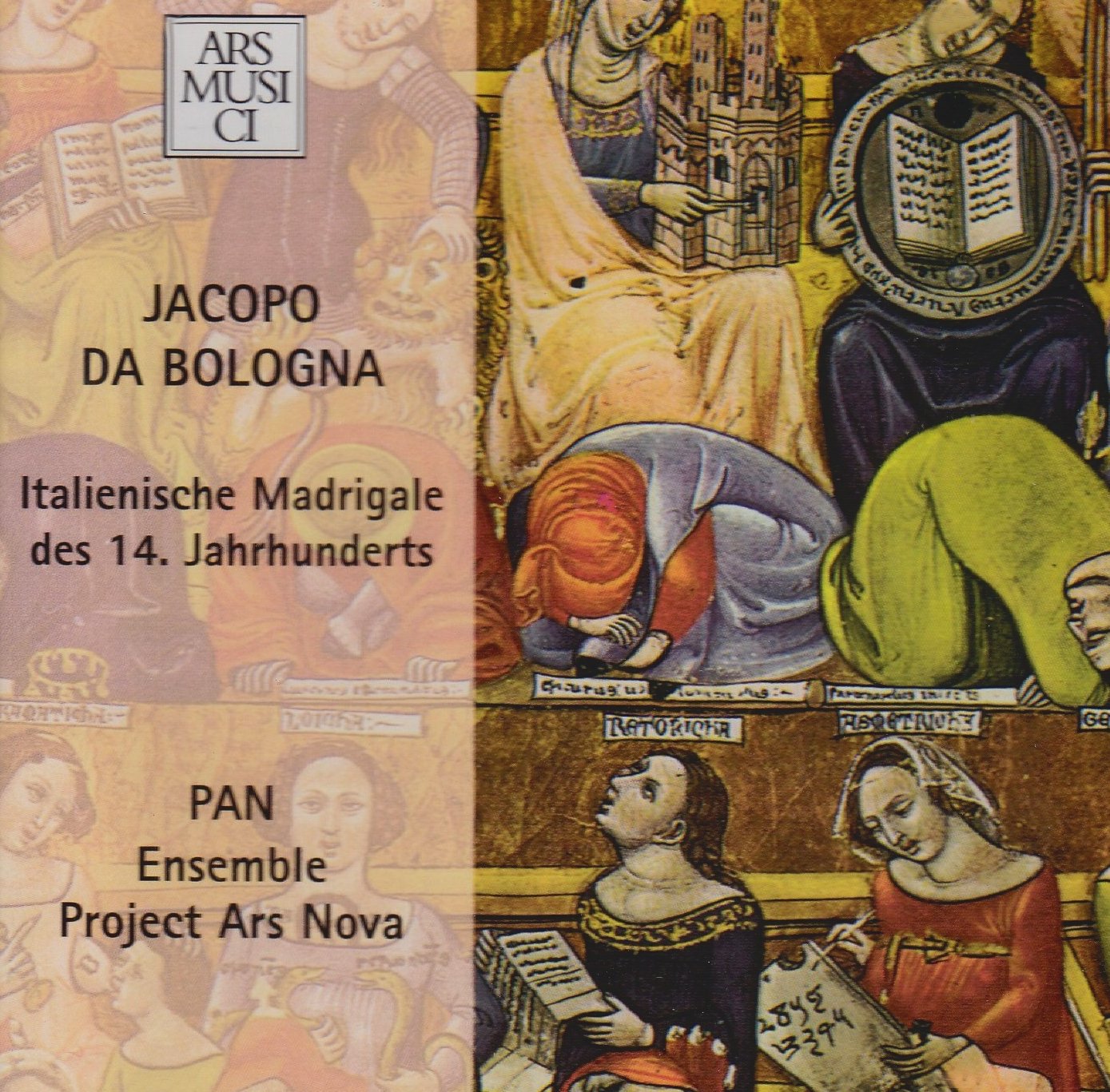 Ensemble PAN
Ensemble Project Ars Nova draws its name from the title of the 14th-century music treatise Ars Nova (c. 1322), written by the French composer and theoretician Philippe de Vitry. While the primary concern of the treatise was to delineate the newly evolved means of notating rhythm, the term “Ars Nova” began to be used in a general sense to describe the new musical forces of the 14th century that collectively formed a “new art”. PAN has borrowed the term and used it in this spirit. Ensemble PAN specializes in this late medieval repertory, an art form created by people with passions not so dissimilar from those of modern society. Members of the Ensemble met while working at the Schola Cantorum in Basel and founded the group in 1980.

Magister Jacopo da Bologna flourished from c. 1340-60, and played a major role in the beginning of composed Italian polyphony. Jacopo, like his contemporary Marchetto da Padova, came from a university town well-known as a center of musical study. Whether he received his training in a clerical school or had contact with the University in Bologna has not been established, and few recorded biographical details of his life have survived. Text references in his compositions indicate that he worked at the Visconti court in Milano during the 1340's and at the Verona court of Mastino II della Scala in the 1350's. Though little is known about Jacopo's relationship with these patrons, the texts provide information about his associations and activities in the two courts.

The history of the Visconti court is a history of a power struggle within a family. It was a struggle marked by violence, treachery, and plague epidemics. Jacopo was at the court during the reign of Luchino (1339— 49), whose administrative talents the composer praised in “Lux purpurata” and “Lo lume vostro”. “O in Italia” celebrated the birth of twins born to Luchino and his wife Isabella on August 4, 1346, however Jacopo's references to court intrigues and treachery are less explicit. “Lo lume vostro” includes a possible allusion to Luchino's nephews who conspired against him and were subsequently banished. When the 'Black Death' struck Milano in June 1348, Jacopo managed to survive, but his patron Luchino died shortly thereafter on January 21, 1349. Although he may have succumbed to the plague or another illness, references by contemporary chroniclers hint that he was poisoned by his wife, the beautiful and reportedly unfaithful Isabella Fieschi. “Posando sopra un' acqua” refers to a beautiful woman who had changed into a deadly serpent, and similar references to a treacherous beauty are found in “Sotto l'imperio”. However, these references are vague, and their connection to Isabella is conjectural. “Prima virtute” describes the first virtue as knowing when to be silent — perhaps a sarcastic comment on the fact that no formal charge or investigation was made against Isabella after her husband's death. The composer left the Viscontis for employment at the Scala court in Verona shortly after Luchino's demise; whether he was forced to leave is not known.

Jacopo's engagement in Verona coincided with that of two other composers, Magister Piero and Giovanni da Cascia. Their work at the court of Mastino II della Scala was of a competitive nature, as the three attempted to outdo each other in their compositions. They chose similar themes and names, and sometimes even set the same texts. This competitive spirit can be seen in the text of “Oselletto salvaco”, where Jacopo criticizes his rivals for trying to compete with true masters: Filipoti (Philippe de Vitry), Marcheti (Marchetto da Padova), and Fioran (a singer associated with Petrarch). Jacopo's fondness for sarcasm is again evident in the ritornello: “Thus the world is so full of masters that one can no longer find the students”. The artistic activity in Verona was stimulated by more than just the competitions of Jacopo, Giovanni and Piero. Dante stayed at the court of Mastino's uncle Cangrande della Scala. Marchetto da Padova's important treatise concerning Trecento music theory, the Lucidarium, was completed in Verona. Petrarch was also in Verona, and it is likely that Jacopo composed the music for “Non al suo amante” at this time. It is also possible that Jacopo's contact with Petrarch continued in the 1350's, as Petrarch permanently settled in Milano (1353-61), and Jacopo appears to have reestablished contact with the Viscontis after 1352. Whether he remained at the Visconti court or lived past 1360 we cannot be sure, but his reputation continued and was documented in fifteenth-century literature and music. Prudenzani's Il Solazzo (1410-20) describes a performance of “Aquila altera”, and the contemporary “Faenza Codex” contains ornamented instrumental versions of “Aquila altera”, “Non al suo amante”, “I'me sun un che” and other Jacopo compositions. Although the Faenza ornamentive style dates considerably later than Jacopo's compositions, and is basically idiomatic to a keyboard instrument, the “Faenza Codex” is nevertheless an invaluable source of information concerning the performance of Jacopo's music by a later generation of Italian musicians. 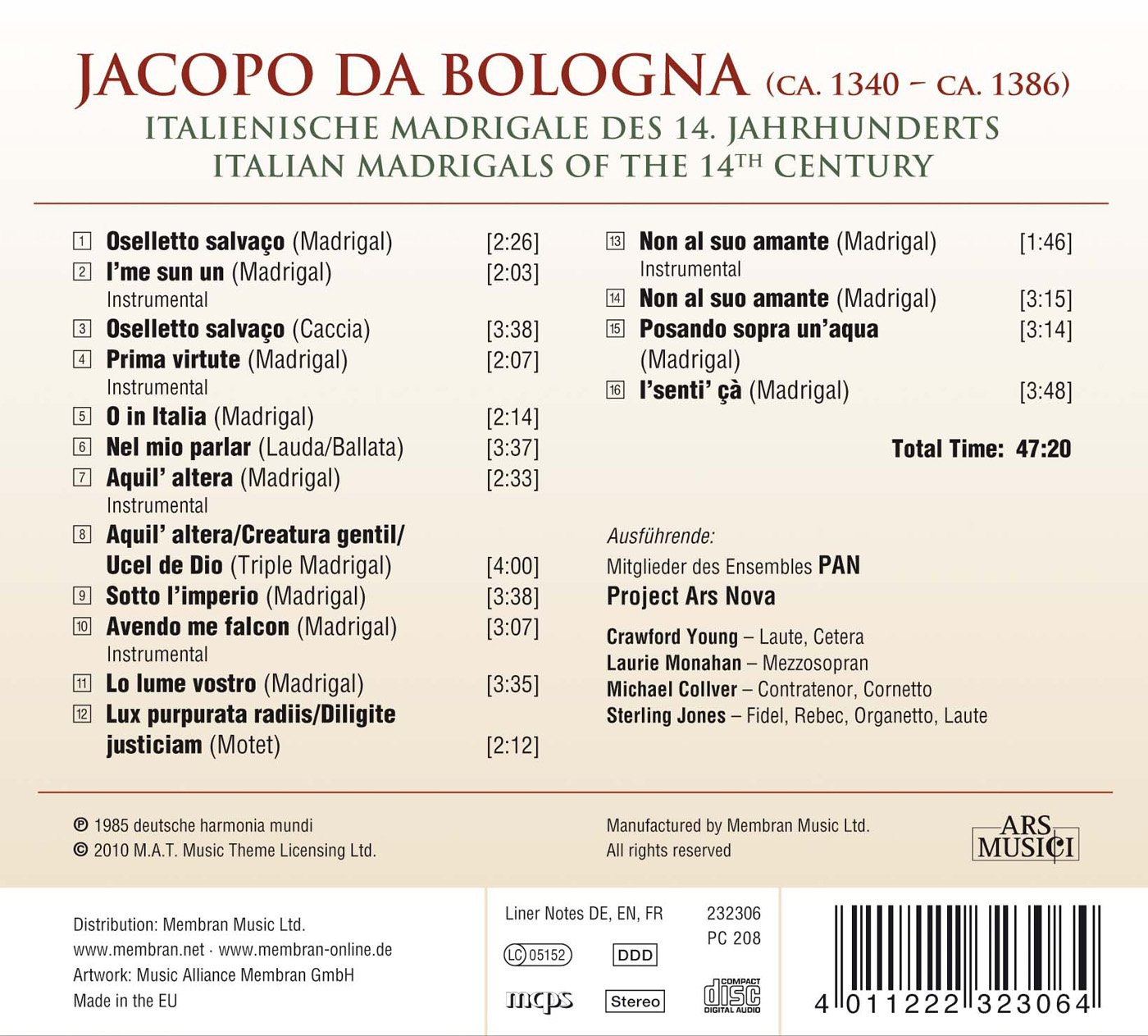