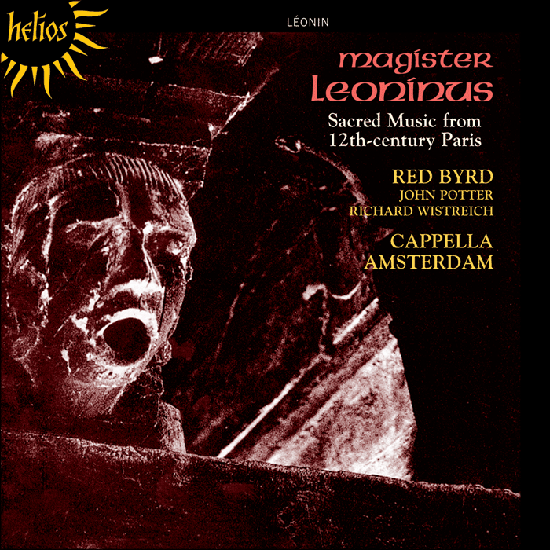 2. Alleluya. Dulce lignum, dulces clavos  [8:02]
Mass on The Finding of the Holy Cross


Red Byrd believes that the point of singing the music of the past is to illuminate the present. Its constant members are John Potter and Richard Wistreich, who are joined by other singers and instrumentalists with a strong grounding in early music to explore song old and new.

Its first concert, in the Musikfest Bremen in 1989, ranged from Monteverdi to Frank Martin and John Paul Jones, and in 1990/1 it toured the United Kingdom on both the early and contemporary music networks. Since then it has visited Canada, Ireland, France, Belgium, The Netherlands, Germany, Austria, Italy and Finland. In 1993 it gave the first performance of Ivan Moody's Passion and Resurrection with the Estonian Philharmonic Chamber Choir at the Tampere International Choir Festival, which had commissioned the work. It gave it again with the Cappella Amsterdam at the Musica Sacra Festival, Maastricht, and these forces have recorded it for Hyperion (CDA66999), adding to the group's recordings of music by Monteverdi, Blow and Purcell with the Parley of Instruments. Broadcasts for BBC Radio 3 have ranged from Leonin via Palestrina, Whythorne and Purcell to the first performance of Thea Musgrave's Wild Winter. John Potter's Vocal Authority is published by Cambridge University Press; Richard Wistreich is professor of singing at the Staatliche Hochschule für Musik, Trossingen; both are contributors to the Cambridge Companion to Singing. 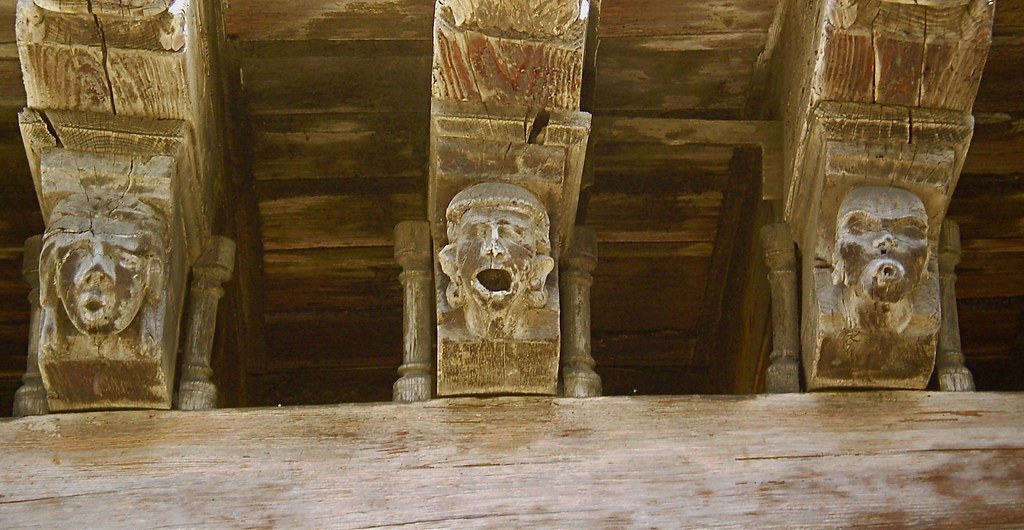 An account of late twelfth-century polyphony was first written a hundred years after the event by a monk who may have come from Bury St Edmunds; history has not entrusted us with his name and he is usually referred to by the title he received when his treatise was first published in the nineteenth century — Anonymous IV. Anonymous as he was, he tells us about two of the most important composers of the fifty years either side of 1200: the magistri Leoninus and Perotinus. Leoninus, we are told, wrote a cycle of two-part settings of the most important chants in the liturgical year—Christmas, Easter, Assumption and other feasts; this cycle was called the Magnus liber organi (‘The great book of organum’). Perotinus and his contemporaries played an important role in the careful recasting and elaboration of this repertory. According to the monk from Bury St Edmunds, Perotinus either shortened or edited (interpretations vary) Leoninus’ great book of organum; long sections of almost improvisatory scope were rewritten according to the tighter principles of discant composition that Perotinus himself may have contributed to codifying. Both Leoninus and Perotinus worked at the Cathedral Church of Notre Dame de Paris.; while little is conclusively known about the biography of Perotinus, recent fashion has inclined to identify Leoninus with Leo, a canon of Notre Dame in later life and, incidentally, an author of neo-Ovidian homoerotic poetry.

Organa of the type that make up Leoninus’ Magnus liber organi are polyphonic settings of plainsong. The original chants employ two musical styles: the solo sections are elaborately melismatic and contrast with the simpler, more syllabic, sections sung by the schola. It is the melismatic solo sections of the chant that are set polyphonically. The result is that a performance of organum involves polyphony and plainsong. Viderunt omnes and Priusquam te formarem are both Graduals and have the overall structure Respond—Verse—Respond. Within each of these main sections are settings of both solo and choral chants; the Respond consists of polyphony followed by the remainder of the chant, and the same pattern is followed in the Verse, and of course in the return of the Respond. Usually, the second Respond is simply a repeat of the first one, as in the case of Priusquam te formarem. However, in the case of Viderunt, the second Respond is not only composed anew but a third setting is also preserved, as is a second setting of the Verse. On major feasts, when the Gradual was followed by an Alleluya, the repeat of the Respond was usually omitted. In Paris around 1200, however, the practice was different.

Leoninus’ organa dupla of the Magnus liber organi took the plainsong and did one of two things with it: for the more syllabic sections of the chant that he set, he laid out the lowest part (the tenor) in long notes and wrote highly elaborate, rhapsodic lines above it (the duplum); this style of music was called organum per se (medieval terms vary, and theorists took a pedantic pleasure in pointing out the complexities of usage for a term — organum — that could mean a complete piece or a generic style or, as here, a subsection). Alternatively, he took the long melismas of the chant and organized them into repeating rhythmic cells and wrote a correspondingly tight rhythmic duplum above it. The rhythmic organization of this procedure gave rise to what are called the rhythmic modes (this style was called discantus). Both types of music exist within the same composition; the sections based on highly melismatic chants that use the rhythmic modes are called clausulae when they are given discrete, self-contained forms. The resulting structure of alternations of plainsong, organum per se and discantus can be illustrated by a transcription of the text of Alleluya. V· Non vos relinquam.


In this transcription, those parts of the text that are left in plainsong are given in roman type, those in organum per se in italics and passages in discantus are given in underescored italics. The use of a full-blown clausula in the Alleluya section of the piece is a rarity; the only other clausula in the composition sets the plainsong melisma on the words ‘et gaudebit’. All the remaining sections in discantus (settings of the plainsong on the words ‘relin[quam]’, ‘orphanos va[do], et ven[io]’ are just that: brief digressions into fully measured note-against-note music in the context of the prevailing organum per se, in which the composer has not attempted to create any sense of structural order to the music in the same way that he does in the clausulae.


Perhaps the most striking thing about this piece, and Graduals in general, is that most of the first section (the Respond) is left in plainsong. There is only one true clausula in the composition and that is on the word ‘Do[minus]’ in the Verse. The other sections in discant are short and do not establish the same sorts of phrase structures and patterns.

This recording includes compositions for the main feasts from the first part of the liturgical year. Although the year starts at the beginning of Advent, the first major feast is Christmas; Viderunt omnes and Alleluya. V· Dies santificatus would have been the musical centrepieces of the third Mass on Christmas Day in the last quarter of the twelfth century. The liturgy of Notre Dame was exceptionally generous to Easter, and several Alleluyas that are unique to Paris were set by Leoninus; Red Byrd sing the best known of these, Alleluya. V· Pascha nostrum (the Alleluya for Easter Day). They also perform the two Alleluyas that survive for Pentecost (Spiritus Sanctus and Paraclitus Spiritus Sanctus), the second of the two Alleluyas for Ascension (Non vos relinquam), the only music for the Feast of the Holy Cross (3 May), and all the music for the Feast of St John the Baptist (24 June). The rest of the liturgical year represented by the Magnus fiber organi includes a long series of works for the Assumption of the Blessed Virgin Mary and the Common of Saints, Martyrs, Bishops and Virgins.

Performing the duplum lines in organum per se is a skill that is difficult to regain at the end of the twentieth century. The music notated in the original manuscripts gives a mixture of information: some idea of what the composer’s overall structure might have been, and an idea of at least one (and probably more than one) performer’s view of the music. And it has to be remembered that a ‘performer;s view’ of this music would almost certainly have entailed changes to pitch and rhythm, and a sense of what a thirteenth-century editor would have done in trying to copy down and render consistent a wide range of material. So these sections which, in their floridity, resemble late eighteenth- and early nineteenth-century coloratura vocal lines, differ in that they are not just blueprints to be ornamented; they are blueprints that have already been partially ornamented, and the singer of the duplum part treads a very careful path between the slavish duplication of a medieval performer’s view of the work and the complete recreation of Leoninus’ music.

It used to be thought that the sustained notes in organum duplum were to be held relentlessly: a challenge to breath control and the sanity of the singer taking the part. Re-readings of thirteenth-century theory suggest that the tenor is responsible for contributing with great subtlety to the texture of the work by breaking the sound, at the same time as one or more of the upper voices, and this is the procedure that is employed here.