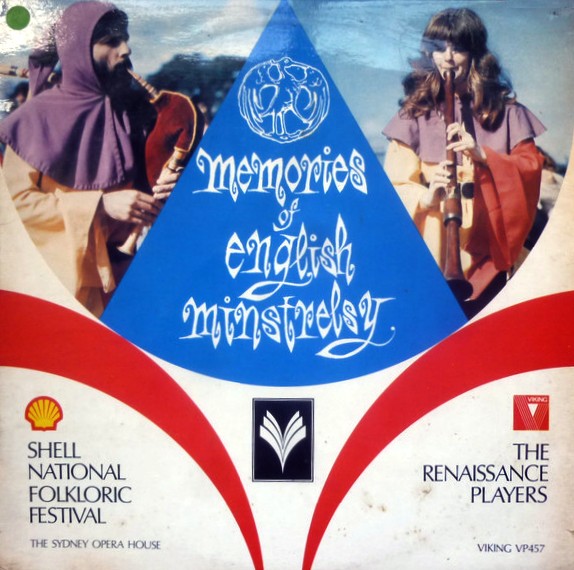 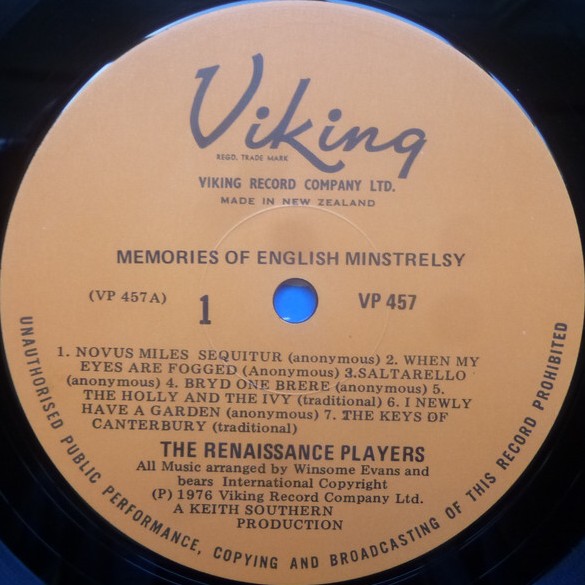 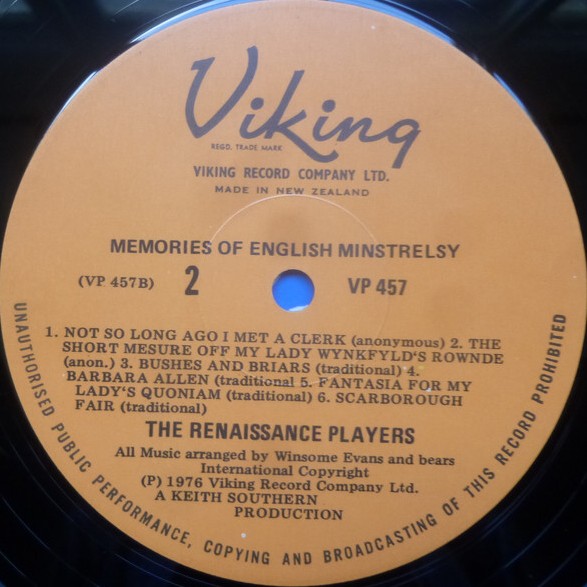 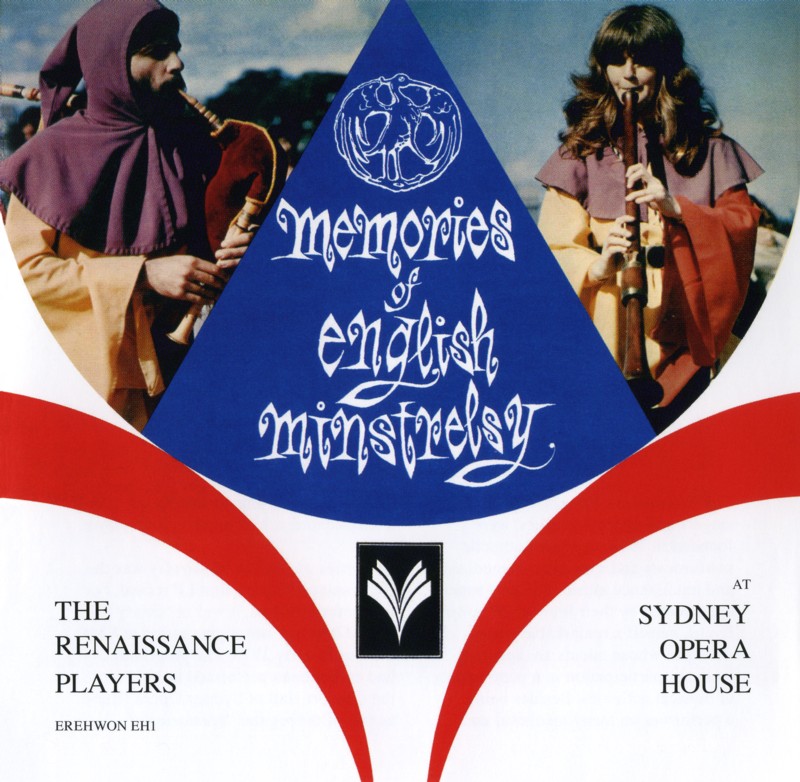 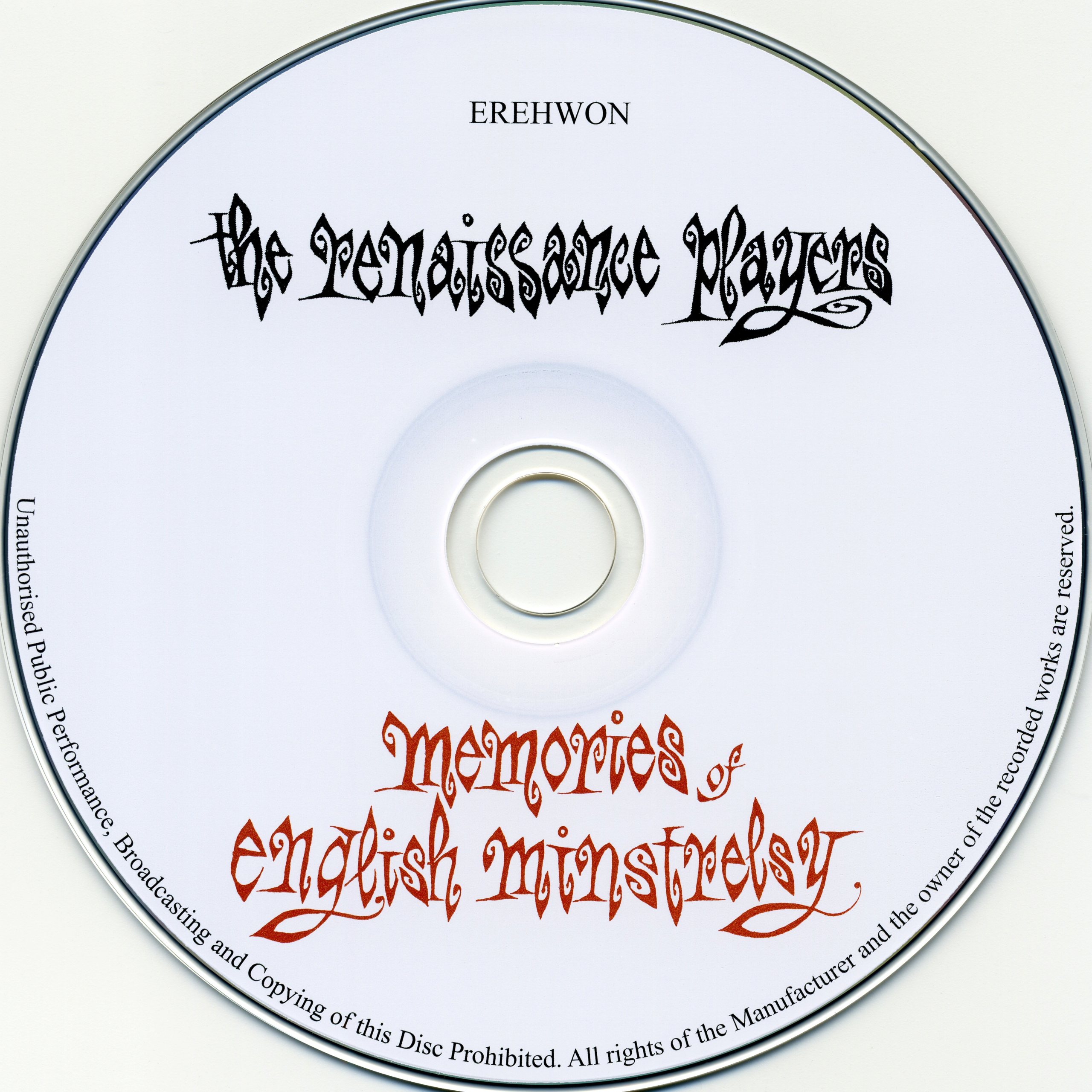 The Renaissance Players, a group of singers and instrumentalists, were founded in 1966; they use authentic instruments and specialise in mediæval and renaissance music. The performers are directed by their founder, Winsome Evans, herself a remarkable young musician whose talents are apparent from her participation in a wide variety of musical activities. Besides being a performer on many medieval and renaissance instruments, Ms Evans is also a harpsichord soloist and continuo player.

Memories of English Minstrelsy was the Renaissance Players' first LP record. For precuniary reasons, it was necessary to record it in one late-night session at EMI Studios in early 1976. The programme had earlier been performed in 1975 in the Concert Hall of Sydney Opera House as one of the regular "Memories of..." dance/music folkloric festivals organised by Victor Carell and Beth Dean. For the 1976 recording, some of the poetry which had been an integral part of the 1975 live concert, had to be read by David May (tracks 2 and 12), due to the unexpected death of his father Frederick May, one month before the studio recording. There are, nevertheless, two readings by Frederick May — I newly had a garden and Not long ago I met a clerk (tracks 6 and 8). These were dubbed onto the LP from reel-to-reel tape recordings of previous Renaissance Players' concerts, in order to, in some way, replicate the 1975 Sydney Opera House concert.

Tracks 14-21 of this new CD pressing consist of the live poetic readings Frederick May delivered at the ABC's Gold Series Concert performed by the Renaissance Players on October 10th, 1975 — again, in the Concert Hall of the Sydney Opera House. When this concert was later broadcast on ABC Radio all the spoken recordings were omitted (possibly censored?) to our intense disappointment, as these were an important interlinking component of all this group's concerts.

The CD thus restores this component of the Renaissance Players' recorded history — and, with the live ambience of this Opera House concert, recaptures the frequent, spontaneous and enthusiastic responses from the full-house audience to Frederick May's uniquely enchanting readings. He was a major contributor, linking poetic with musical concepts and moods, to all the Renaissance Players' concerts across Australia (Sydney, Brisbane, Melbourne, Perth and so on) from the beginning of 1973 to the end of 1975, starting with The First Runnymede Pop Festival (a still on-going series of concerts of mediæeval music and poetry).

While there are many tape recordings of Renaissance Players' concerts enlivened by Frederick May's spoken readings, this is the first CD recording to recapture the way he enthralled and engaged audiences (of all ages) over that three-year span.

Frederick May was the founding Professor of Italian at the University of Sydney from 1964 until early 1976. All the members of the Renaissance Players during the 1973-1975 period were encouraged by his charismatic, unofficial mentorship to develop their own creative, performance and intellectual gifts.

The remastering of the LP and cassette tape, removing time's crackles and hissings, was undertaken by the masterly Don Bartley in February, 2014.