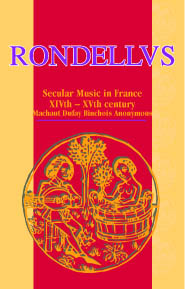 With the banning of motets from religious services in 13th century France, polyphonic scholarly composition would no longer be the privilege of the church. By 1300, polished forms of poetry had emerged in French secular song, but there were rarely composed polyphonically, using instead a very simple style. The breakthrough which occurred in secular song in the 14th century marks the beginning on the renaissance in music. The strict textual forms (formes fixes: rondeau, virelai and ballade) of trouvere song were adopted and like the motets, were integrated with the complicated style of ars nova. These song compared to the rationally, at times altogether mathematically, composed motets, had a much freer and more serious composition, using an imaginatively embellished upper voice (discantus) as the principal voice.

Polyphonic secular song first rose to prominence through the composition of GUILLAUME DE MACHAUT (1300/05 - 1337). Despite being a member of the clergy, religious composition was clearly of secondary importance in his work. Machaut was one of the great poets of his century and his emphatically personal, often autobiographical love poetry can be regarded as purely renaissance. A new and personal expression of emotion is equally perceptible in his music, even when the rational side of the composition is impeccably polished.

The second height of French song is related to the rise of the Franco-Flemish school in the first half of the 15th century. Of particular importance to the emergence of this new style were its first great masters, GUILLAUME DUFAY (ca. 1400 - 1474) and GILLES BINCHOIS (ca. 1400 - 1460). The novelty and power of French ars nova lives on in both of their work, but with the additional influence of a new English style, countenance angloise, on which la nouvelle pratique de faire fresque concordance (new method of creating novel concordance) was  based, as this new style was described by the French poet Martin le Franc in his poem Le Champion des Dames (1440). Dufay spent his formative years in Italy, where he was influenced by the emotional and flowing melodies of Italian song. These two composers form an interesting contrasting pair. While Dufay is representative of the classic musical scholar of cleric education, Binchois is usually portrayed as a simple soldier, who became a singer of the Burgundian court chapel. There is a great deal in common in their composition, yet Dufay's music is clearly more finely polished while Binchois's enchants with his simple and powerful expression.