The repertoire of songs in English from the 12th to the early 14th centuries is surprisingly small. We know that much music composed to English texts is lost to us (due to the oral mode of vernacular song transmission), and must therefore content ourselves with the less than two dozen pieces, some in fragmentary form, which have survived in a variety of manuscript sources, including a saint's life, a book of miscellaneous religious writings, and even the reverse side of a papal bull. Unfortunately, there exist no large manuscript collections of English song comparable to the chansonniers of the Troubadours and Trouvères, since the courtly, literate, — and therefore written — tradition in England before Chaucer's time was largely French. Anglo-Norman song was the fashion amongst the aristocracy, and those pieces with English texts which found their way into writing came for the most part from a religious-scholastic milieu, such as the Franciscans, in which English was prevalent.

In bringing these songs back to life, our point of departure has always been to concentrate on the texts, as they are found in the original musical sources as well as in published editions. Such comparative work helps the singer to establish a working text, and can often shed light on problems of meaning and emphasis, orthography and pronunciation. Having a satisfactory basic text for a poem begins a long process of interiorizing every aspect of the poet's art, from the acoustical properties of the language (vowel and consonant sounds, rhyme, inner rhyme, alliteration, etc.) to comprehending the sense of specific word choices and rhetorical devices.

As this process continues, the singer realizes that a given edition is often at odds with the text as found in the musical source, which can be unclear or even garbled. Since our principle has been to depart from the musical source as little as possible, we have chosen the manuscript version when a text editor has made changes which would necessitate modification of the musical setting. Sometimes the musical information provided by the manuscripts is also ambiguous, or we have reason to suspect scribal error. For instance, the final line of “Bryd one brere” may be sung a third lower if one agrees that the scribe made a mistake in placing a c-clef (we have chosen to record the version as found in the manuscript).

In general, we have assumed that a written musical source is not an Urtext of a song, but rather a written documentation — however incomplete — of some stage in the song's active life. A manuscript may represent a remembered performance, dictated or otherwise transmitted to a scribe, or it might have a more direct connection with the singer himself, or a musician from the original singer's tradition.

The subject of rhythm in medieval song has generated much partisan discussion. Given that the notation of these pieces is often rhythmically ambiguous and open to various interpretations, we have tried to avoid a dogmatic approach in favour of an evaluation of each individual song. For example, “Edi be thu, heven-queene” lends itself naturally to a simple rhythmic pattern based upon the text, whereas “The milde Lomb” or “Worldes blis” demonstrate a more subtle use of melody, and a style which is essentially ornamental and impossible to fix in rhythmic units. In another case, the sequence “Jesu Cristes milde moder”, we have chosen a type of musical recitation which avoids rhythmic regularity and follows the shifting patterns in the text. The performance of “Bryd one brere” recorded here reflects the inconsistent use of mensural notation found in the source, and hence, re-creates a performance containing passages which the scribe would have found difficult to notate using the symbols available to him.

Decisions about the use (or non-use) of instrumental accompaniment were also made according to the character and structure of each song. An accompaniment may consist of a simple drone, or it may employ the more complex techniques of heterophony, mirroring and commentary, but in all cases the melodic vocabulary of the instrumental part is derived from the songs themselves or other pieces from English sources of the period. For St. Godric's song in praise of St. Nicholas, the simple melody has been amplified through techniques of polyphonic vocal elaboration which would have been part of an oral tradition in medieval clerical circles. The definition of an “instrumental” style is a long process and is possible only through a close study of the vocal repertoire. The existing instrumental pieces, like the estampie in the Oxford MS (Bodleian Library, MS Douce 139, f.5) give us some information about forms and melodic structure, but they are very few and diverse, and do not permit us to rebuild a tradition of instrumental playing using only those sources.

From literary sources we know that vocal music was played on instruments, but we have little information about how the material was used in an instrumental performance. Given the specific possibilities of each instrument and the fact that a large part of the instrumental music served as dance music, it seems likely that the medieval instrumentalist would re-arrange the material freely and add to known melodies.

For the pieces on this record we have made use of simple dance forms, such as the rondeau (“Edi be thu, heven-queene”, Nr. 3) estampie (Oxford MS, Nr. 5 on this record), and the more complex lai (“Ar
ne kuth ich sorghe non”, Nr. 13 on this record). The instrumental arrangements were made by Margriet Tindemans, using melodic material from the vocal pieces whose titles they bear. Sometimes melodies from related songs were added; at other times we made and improvised new melodies while staying as close as possible to the original material. 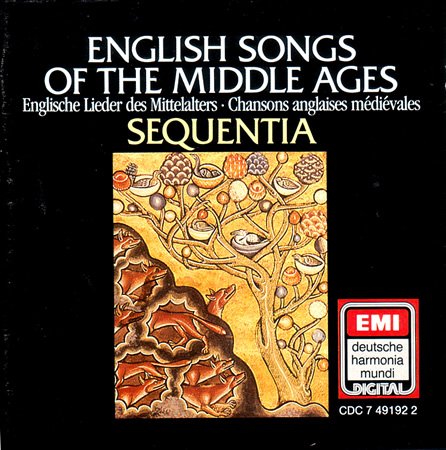