Sequentia
named after one of the most significant musical and poetic forms of the High Middle Ages, was founded by Benjamin Bagby and Barbara Thornton in 1977 and rapidly grew to become the internationally acclaimed leader in its field. While reconstructing the animated musical traditions of medieval Europe, the ensemble uniquely combines vocal and instrumental virtuosity with innovative research work and programme planning.

Sources:
The motet recordings are based largely on the two main manuscript sources, used in conjunction with the text and music editions of Leo Schrade and Ernest Sanders, with further changes supplied by Edward Roesner.
The monophonic vocal music is performed from the original source (Paris, fr. 146), used in conjunction with the text edition of Emilie Dahnk.
The two motet intabulations are based on the manuscript fragment London, British Museum, add. 28550. A bibliography and discussion of Philippe de Vitry's motets and the Roman de Fauvel can be found in:
Paris, Bibliotheque National, f. fr. 146: Le Roman de Fauvel in the Edition of Chaillou de Pesstain. (Introduction by François Avril, Nancy F. Regalado and Edward H. Roesner). Edited by Edward H. Roesner. Broude Brothers Ltd., New York, 1990. During the early 14th century, a new style, an ars nova, swept over French music transforming the hitherto unpretentious genres of the motet and the courtly refrain lyric into the most ambitious musical forms of the later middle ages. According to the anonymous Règles de la seconde rhétorique, it was Phillipe de Vitry who "invented the style of motets, ballades, lais, and simple rondeaux"—who was responsible for the stylistic breakthrough of the ars nova. Vitry was one of the most illustrious men of his century, a diplomat who served three French kings, an ecclesiastic who presided as Bishop of Meaux, an academic and intellectual famous as a moral philosopher, a poet, and, with Guillaume de Machault, the greatest musician of the age. But despite his fame, little of Vitry's work has survived. We have none of his scholarly writings and only a handful of his poetry, and his celebrated treatise on music, Ars nova, is known only as a torso.

A mere 16 musical works, all of them motets, have been ascribed to Vitry by modern scholarship, and of these only four have strong documentary claims to authenticity (#5, 13, 19, 20 on this recording). All are preserved in one or the other of two manuscripts – the famous Roman de Fauvel manuscript, Paris fr. 146, which Vitry may have had a hand in producing, copied at the court of Philip V in 1317-18, and the late 14th-century Savoyard manuscript, Ivrea 115, a book with close ties to another French monarch, Charles V. The Fauvel manuscript also contains numerous courtly lyrics of the sort mentioned by the Règles; these may also be by Vitry. In their sophistication of design, subtlety of expression, and extraordinary lyricism, all of the pieces on this recording bear witness to what Johannes de Gro-cheio observed of the motet, that it is not for the unlettered, "since they do not grasp its subtlety or delight in hearing it", but instead "should be performed for the learned and those who inquire into the fine points of the artes".

Several of the motets are on topical themes. Petre clemens (#13) celebrates the election of Pierre Roger to the papacy as Clement VI in 1342. (It was Clement who would elevate Vitry to the see of Meaux in 1351). The motet is replete with the usual panegyrics, but deploys them with consummate skill — thus "Petre clemens" refers to Pierre Roger and Peter, the first Pope, and to the name of the new Pope and to the Papal virtue of clemency. It is conceived on a grand scale, with elaborate hocket sections adding a festive note (15 years earlier, Pope John XXII had called such music "laschivious") and articulating a structure rich in number symbolism. Rex quem metrorum (#1) addresses another great historical figure, Robert of Anjou, King of Naples. And Hugo Hugo princeps invidie (#5) is a polemic against a certain Master Hugues, perhaps an academic colleague of Vitry's, using the shrill language typical of such confrontations with extraordinary force.

No fewer than four motets are concerned with Enguerran de Marigny, minister of Philip IV, executed on the gallows of Paris, at Montfaucon, on 30 April 1315. Two motets protest his abuse of power (#9, 11) and two comment on his downfall (#12, 15). In nova fert (#9) is one of the most brilliant technical achievements in medieval music. Concerned with mutatio, with a political order turned upside-down, and with the overthrow of Marigny, it develops these ideas above a tenor line built as a palindrome, suggestive of Fortune's wheel, and that moves back and forth between ternary and duple meter, an unstable foundation that reflects the overall theme of the work. Heu Fortuna subdola (#12) is equally remarkable in its way. Counterpointing liturgical chants of lamentation in the tenor with a lament on the fickleness of Fortune and images of failure and execution (even an allusion to Montfaucon) in the upper parts, the motet is built on another unstable tenor, consisting as it does of phrases of constantly changing length.

Other motets are liturgical — Adesto sancta trinitas (#4) and Vos quid admiramini (#20), a hymn to the Virgin influenced by the Song of Songs. Others, are exegetical or moral (#3, 7, 16). One, Garison selon nature (#19), an early work, uses the language of fin' amour familiar from the courtly lyrics of the previous century, but clothes it in the virtuoso idiom of the ars nova.

The raison d'etre of the motet lies in the interplay between different, simultaneously sung texts. A few Vitry motets circulated in arrangements for organ, however, in which intricate keyboard ornamentation replaces the text as the primary focus of the piece (#6, 17). The Roman de Fauvel manuscript includes a group of lyrics inserted into the account of the courtship of the goddess Fortune by the beast Fauvel. Some of these songs show Fauvel bringing all his hypocritical charm and modish artifice to his wooing (#8, 10, 14, 18), while the descort, Je qui paoir (#2), sung by Fortune "contre Fauvel", lays out her reaction to his quest. 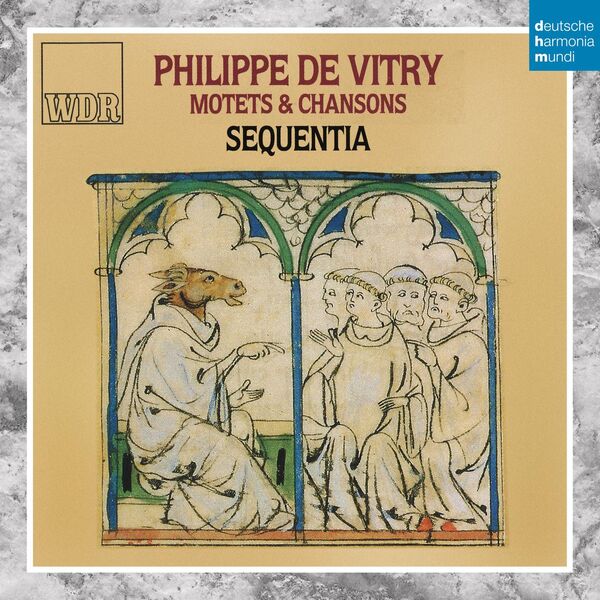