During the final editing phase of this recording,
Barbara Thornton died on 8 November, 1998, following a long illness.
We mourn our loss.

The Edda are the sagas of medieval Iceland, as they are usually called, a series of texts describing various aspects of the society from their laws to their religious beliefs. Some texts are in prose, while some are poetic. The latter are the subject here, and are performed primarily as preserved in the Codex Regius (early thirteenth century).

The sagas of medieval Iceland are some of the West's most fascinating literature, arising from one of the West's most fascinating civilizatons. Iceland was settled by the Norse in the late 9th century, and has been inhabited since then. It's cultural distinctions include not only that early exploration and settlement but a democratic parliament as well. Many of the sagas apparently date to this period, and possibly even prior to settlement, but were written down only from around the 13th century.

This poetry and its recitation are inherently oral traditions. There is no musical notation which accompanies it, and so Sequentia's reconstructions are particularly hypothetical. They are based both on their own study of medieval poetry as it is linked to music elsewhere, the various modal gestures entailed, as well as some of the earliest written descriptions (18th century) of Icelandic recitation by European musicians. The amount of effort put into this production is very impressive, based as it was over the course of years of study.

Regarding the resulting music itself, some sections are particularly compelling, and regardless of provenance (whether medieval Iceland per se or the minds of Sequentia), make for a fine program. There is an alternation of more lyrical passages with some more dramatic recitations, as one might generally say this material was typically performed in the bardic tradition. Medieval pronunciation is attempted as well.

This is one of the most ground-breaking productions in the history of "Early Music" per se, as it uses ideas & techniques learned from the study of contemporary Western traditions which do include surviving notation in order to understand a non-notated repertory. Sequentia's intention is to continue in this direction with other Northern European music, principally the Beowulf saga. — medieval.org This project was originally conceived as a theater production entitled "Edda Eins" and given its premiere in Luxembourg in December 1995. An Introduction to the Poetic Edda

The Reconstruction of Eddic Performance

The Reconstruction of Instrumental Music for the Edda


Summaries of the poems

Óðinn's Rune-Song
In this particular section of the "Sayings of the High One", the one-eyed god of poetry and arcane knowledge, Óðinn, tells his audience in person how he sacrificed himself to himself by hanging from a tree with a spear in his side, thus temporarily entering the realm of death as a means of gathering further forbidden wisdom.

The Prophecy of the Seeress
One of the most famous Old Icelandic poems, Vǫluspá is a first-person account of a stunning vision seen by a prophetess. The seeress gives her audience a striking visual description of the creation of the world, the coming of the gods and dwarves, the fateful death of Baldr, son of Óðinn, and the eventual fiery collapse and destruction of the world at Ragnarǫk.

The Tale of Þrymr
The Tale of Þrymr relates the myth of how Þórr's hammer Mjöllnir was once stolen by the giant Þrymr. The giant then demands the hand of the goddess Freyja as ransom for the return of Mjöllnir. Freyja of course refuses to go, thus forcing the thunder god to demean himself by temporarily taking her place in the disguise of a bride.

The Song of the Mill
This poem contains the early myth of how Fróði, the king of Denmark forces two giant maidens, Fenja and Menja, to grind out peace and then gold on his enormous magical hand-mill, called Grotti. At the end of the poem, Froði pays the price of enslaving others as the women turn from grinding out gold to grinding out war, eventually splitting the stone and bringing about the king's death.

Baldr's Dreams
This poem, written partly in dialogue, involves a conversation between the god Óðinn and a seeress who has been summoned up from her grave at the gates of Hel. Óðinn wants to learn the meaning of the dreams that have troubled his son, Baldr, and is greeted with a brief, yet painful image of Baldr's coming death and the fateful approaching end of the world at Ragnarǫk. Thanks to the following people and institutions who helped us to realize this vast project:

Reykjavik, Iceland:
First and foremost, thanks to Heimir Pálsson for philological consultation, guidance, pronunciation training, and inspiration. Without his tireless help and "midwifery", the realization of this project would never have been possible.
The director and staff of the institute Stofnun Árna Magnús-sonar, especially Gísli Sigurðsson and Rósa Þorsteinsdóttir for assistence with the tape archives;
Terry Gunnell, Þorbjörg Jónsdóttir, Camilla Söderberg and Snorri Örn Snorrason.
Das Goethe-Institut Reykjavik (Leiterin: Coletta Bürling).

Norway:
Reidar Sevag and Hans-Hinrich Thedens of the Institute for Music and Theater, University of Oslo.
Bjørn Aksdal of the Norwegian Council for Folk Music and Folk Dance, Trondheim.

England:
Ursula Dronke (Cambridge), for kindly allowing us access to her important work on the Edda prior to its publication. 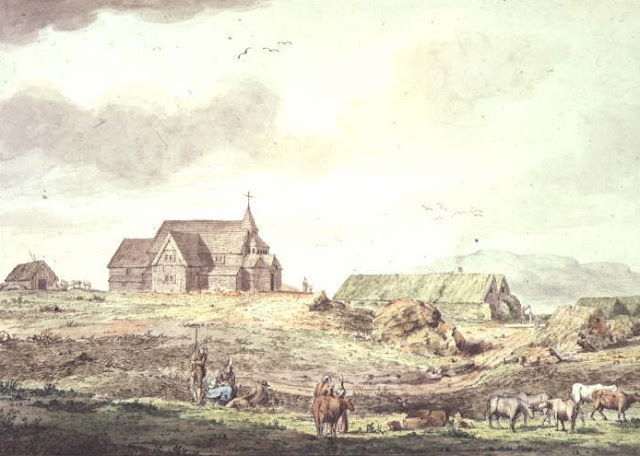