Recorded and produced in the USA 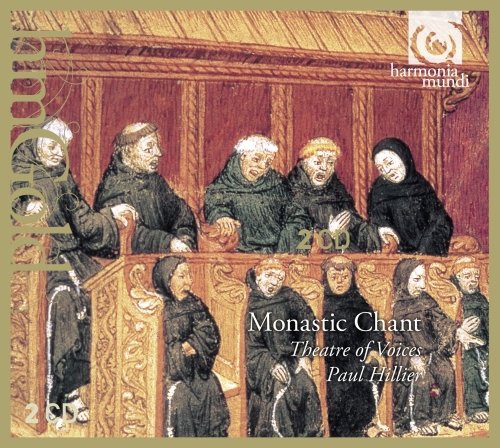 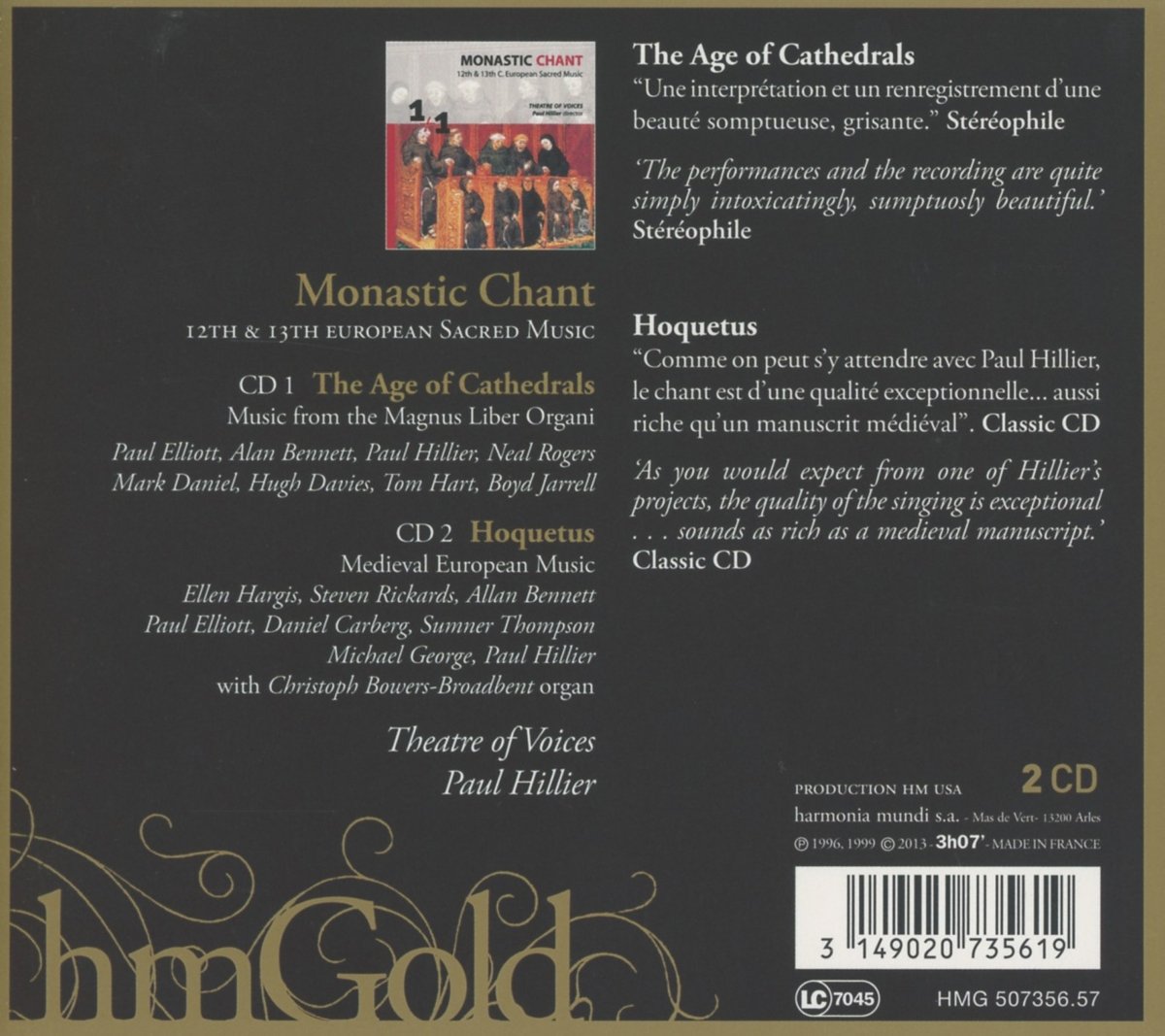 rance witnessed an unprecedented flowering of learning, art, and music in the twelfth century. Most of this “Renaissance” occurred within the Church -all, within the great Gothic cathedrals that sprang up throughout France from the 1130s on. The cathedral was the bishop's church, the seat of ecclesiastical power and administration. Equally important, it was the center of religious life, and above all of the celebration of the liturgy, with elaborate ceremonial and festive music. Building on traditions that had long been fostered in the monasteries, the cathedral musicians drew inspiration from the brilliant and spectacular spaces that the new cathedral buildings provided, producing monophonic and polyphonic lyrical masterpieces of unprecedented dimensions, subtlery, and power. This recording explores the extraordinary musical achievements fostered by the cathedral of Notre Dame in Paris and its antecedents in the great abbey of St. Martial in Limoges.

All of the music from St. Martial is anonymous, reflecting the self-effacing, collective spirit that was typical -and expected- of medieval monastic life. Not so the music from Notre-Dame. Not only are many of the composers known, they were among the most distinguished members of the cathedral community. Adam of St. Victor was cantor at Notre-Dame from early in the century until his death ca. 1140. In that role, he was one of the highest ranking dignitaries in the cathedral hierarchy. His duties included supervision of the music sung in the liturgy, and it was probably in this capacity that he created a body of song that became famous throughout Europe (tracks #8, 14). Adam was succeeded as cantor by Albert (d. 1177), whose Congaudeant catholici (4) was his contribution to the famous liturgy of St. James sung at the Spanish cathedral of Santiago de Compostela, the most important pilgrimage site in medieval Europe. Philip, chancellor of Notre-Dame between 1218 and 1236, was not only a key official in cathedral administration; he was also one of medieval France's most important theologians and moralists, as his Ve mundo (6) will attest. Leoninus was active in cathedral affairs between the 1160s until his death ca. 1201. His magnus liber organi, or “great book of polyphony”, became the most celebrated polyphonic repertory of the middle ages (10). And Perotinus, finally, worked with the bishop of Paris, Eudes de Sully, to reform the liturgy and its music at the close of the twelfth century, weeding out excesses that had crept in around the popular “Feast of Fools”, and providing polyphonic settings on an unprecedented scale for the major church festivals (12, 13, and 15), collaborating with Chancellor Philip on a number of these works (16, among them).

What is noteworthy about these musicians from Notre-Dame is not only their prominence, but also the fact that we know their names at all. The music surviving from St. Martial seems to have originated through improvisation, and to have circulated mainly in the memories of the monks who sang and heard it. The music of Notre-Dame, on the other hand, was fashioned by composers working with quill and parchment, and sung by musicians who learned it from the manuscripts, not by rote. In this sense as in many others, the music of Notre-Dame breathes a profoundly new spirit.

This music served a variety of functions within the medieval ecclesiastical community. Much, if not all of it was intended to enhance and embellish both the great festivals of the church year and the day-to-day religious activity of the monks and clergy who sang and listened to it. Propter veritatem (10) and Virgo flagellatur (12) are florid, rhapsodic meditations on the Scripture readings that precede them in the service, filling the church with sound as the great stained glass windows filled it with light. Mors (13) is a spectacular expansion of a small portion of such a piece, turning it into an intricate four-voice tapestry of rhythmic counterpoint. Perotinus' Beata viscera (16), a lyrical meditation on the Virgin, may be a substitute for the Offertory or Communion chant sung during one of the Masses to the Virgin celebrated at Notre-Dame. Similarly, some pieces (1, 8, and 14, among others) acted as introductions to the reading of the Gospel that followed them in the Mass, lyrical commentaries on the sacred text. Some pieces are festive conclusions to the service, musical and poetic elaborations on the final benediction (4, 7, 15, and probably others). Some have the character of sermons, interpreting mysteries such as the Virgin Birth (2), or excoriating mankind and the Church for their corruption (6). Still others seem to have had no prescribed function; they could have substituted for the Gregorian chant that was the normal vehicle for liturgical song, or they may have been performed in private devotions, or during the routine activities of ecclesiastical life, such as processing to the dining hall. But they all bear witness to a creative outpouring with few parallels in the history of European music. THEATRE OF VOICES is based in the San Francisco Bay Area and regularly tours throughout the USA and Europe. Its founder and artistic director, Paul Hillier, is Professor of Music at the University of California at Davis. The group is flexible in number and its repertoire has three main areas of specialty: medieval and renaissance polyphony, Anglo-American folk psalmody (including the Shape Note tradition), and contemporary tonal composers such as Steve Reich and Arvo Pärt.

The idea of the group was formed while Hillier was looking for ways to expand into different styles of singing while still performing the early music of his choice. Under the name Theatre of Voices he began creating projects and programs devoted to the music of John Cage and Arvo Pärt. After moving to California in 1990, he started to form the nucleus of the present Theatre of Voices, which gave its debut concert at the Berkeley Early Music Festival in June 1992. The group has performed in such venues as the Opéra Bastille in Paris, Hessischer Rundfunk in Frankfurt am Main, the Schauspielhaus Berlin, Vredenburg in Utrecht, the Frick Collection and Alice Tully Hall in New York, the Library of Congress, in Washington, DC, and has appeared on Minnesota Public Radio's St. Paul Sunday Morning.

Theatre of Voices now records exclusively for harmonia mundi usa and has several CDs to its credit, ranging from medieval cantigas to contemporary composers. Its recordings of renaissance music have enjoyed popular success, and discs devoted to the music of Josquin and Mouton (HMU 907136), Lassus (HMU 907076) and Tallis (HMU 907154) will soon be joined by the music of Byrd and other great composers from the Golden Age of English music. Chant and medieval music is also one of the group's strongest areas, as testified to by the present recording, the Cantigas at the Court of Dom Dinis (medieval Portuguese songs, HMU 907129) and a recital of Trouvère songs (in preparation, HMU 907184). Theatre of Voices has also begun to record early American music, some of which can be heard on their best-selling CD Carols from the Old and New Worlds (HMU 907079). The group is now preparing further early American music, to be presented in concert with works of contemporary American composers who are sympathetic to the earlier style. Theatre of Voices has just completed a recording of works by Arvo Pärt to be released in 1997 (HMU 907182).

PAUL HILLIER, the founder and artistic director of Theatre of Voices, began his career as a singer in the choir of St. Paul's Cathedral in London and also became a member of the Queen's Chapel Royal at Windsor Castle. For many years he devoted his principal energies to the Hilliard Ensemble, of which he was co-founder (in 1974) and musical director. During his tenure the group rose to international prominence, making tours throughout the world, with numerous television and radio appearances. He also established its summer festival and planned and directed over thirty recordings, many of which earned distinguished prizes.

Throughout the 1980s, Hillier increasingly divided his time between England and America: during 1980-81 he taught at U. C. Santa Cruz, and in 1984 he was Copeland Colloquium Fellow at Amherst College. In 1990, he moved to the United States, where he was Professor of Music at the University of California at Davis until 1996. Currently, he is Director of the Early Music Institute at the Indiana University School of Music, Bloomington.

A Grammy nominee and recipient of two Edison Prizes, Hillier is now active as a solo singer and as a frequent guest conductor with choirs around the world. His wide musical interests range from medieval to contemporary music and include singing and conducting, composing and writing.

Hillier has written a book about Pärt which will be published in 1996 by Oxford University Press, and has published several anthologies of choral music. He is also General Editor of Fazer Editions of Early Music (Helsinki) and a member of the Advisory Council of Early Music America.

The music on this recording has been gathered from various editions, with additional reference to facsimilies of the original sources. In virtually every case, however, considerable alterations have been made, particularly to details of rhythm and word placement. The Notre-Dame polyphony was sung directly from versions prepared by Edward Roesner for the Oiseau-Lyre complete Magnus Liber edition (in progress). The St. Martial monodies were sung from Leo Treitler's versions in his 1967 dissertation “The Aquitanian Repertory of Sacred Monody in the Eleventh and Twelfth Centuries”, For the St. Martial and Codex Calixtinus the (very different) editions by Theodore Karp (The Polyphony of Saint Martial and Santiago de Compostela; 2 vols. Oxford 1992) and Hendrik van der Werf (The Oldest Extant Part Music and the Origin of Western Polyphony; 2 vols. Rochester 1993) were consulted -- the results are very much our own responsibility. The Adam of St. Victort sequences were prepared from the 1900 edition by Pierre Aubry. Our gratitude is extended to all of the above and to the University of California at Davis which gave financial assistance to the original project. A special acknowledgement is also due to Humanities West of San Francisco who proposed the theme of The Age of Cathedrals and organised a symposium on the topic in that city's Grace Cathedral during May 1992.