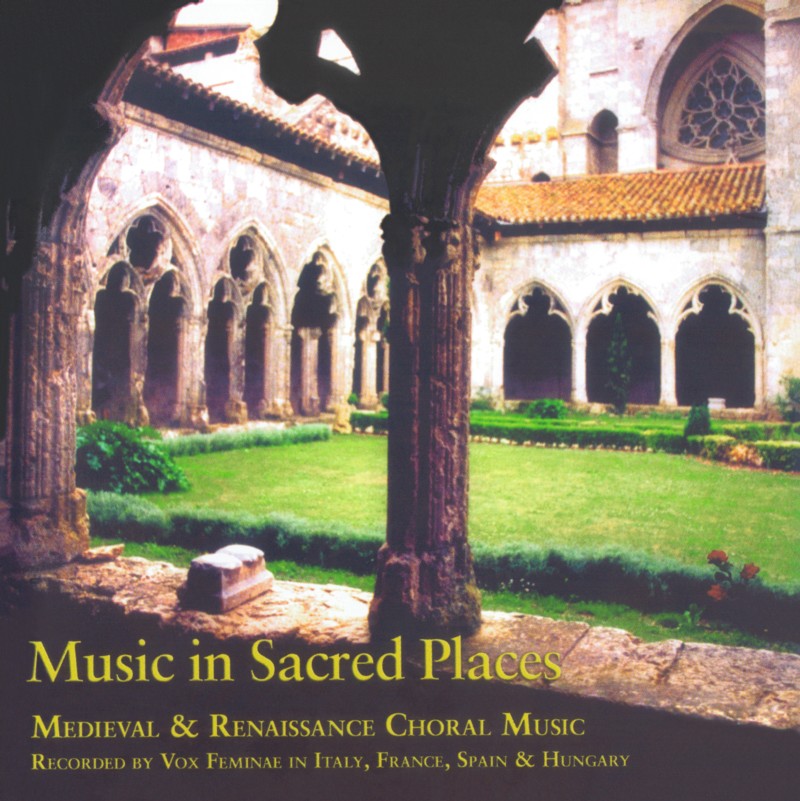 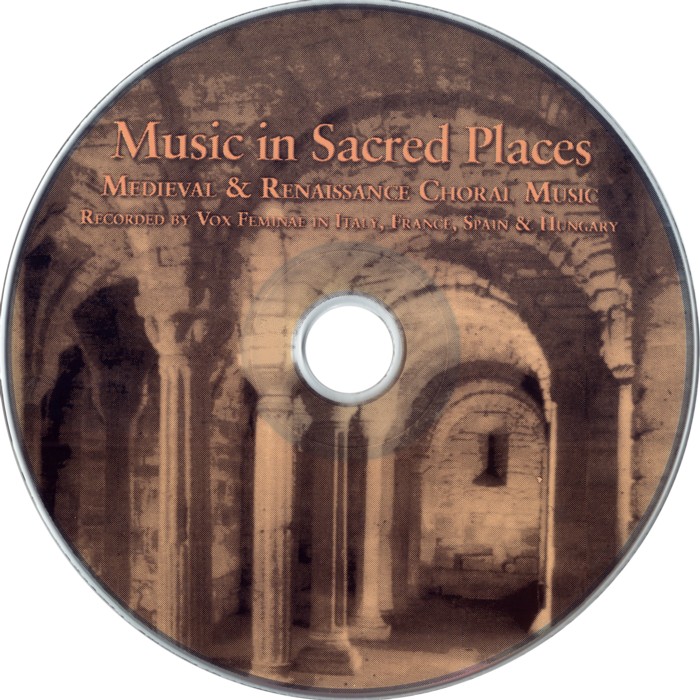 Vox Feminae is grateful to Mary Pike,
whose kindness and continuing generosity has made the creation of this CD possible.

We want to acknowledge all who contributed to the sounds of Vox Feminae from 1990 to 2001.
While the composition of the ensemble has changed over the years, our love of this early music remains constant. 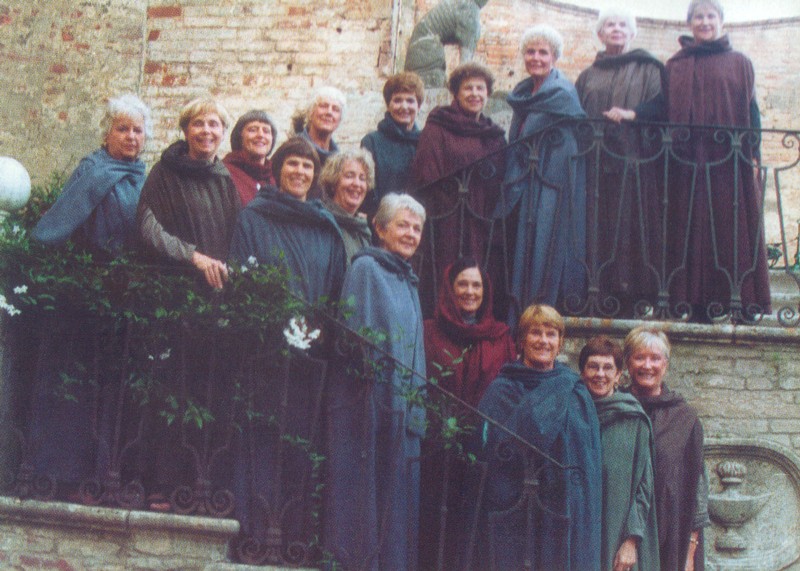 With this music we invite you to travel with us in your mind's eye to the awakening years of Medieval and Renaissance Europe, to a time when sacred music was not "performed" in concert, but rather sung to glorify God and to add depth to the service of worship. As you listen, explore with us the experience of churches whose very construction enhanced the pure sound of chant, intensified dissonances of simple organum and provided lingering resolution of hollow 5ths and octaves—sounds familiar to the people of the time.

We invite you to come to 4th century Italy and to the church of St. Ambrose in Milan. Further, share as we travel the arduous path called the Camino de Compostela, following the 12th century pilgrim bound for Santiago. Hear with us, on the wind-swept pass of Roncesvalles, the echos of Roland, crying out to Charlemagne, unaware that he had been deserted on this desolate mountainside. Experience our awe, when, one night, led by an inspired 78 year old guide, we walked through the torch-lit corridors of Mount St. Michel to sing in its stony cold chapel. Hear the reverberating echoes as we sang in the underground crypt of Chartres Cathedral.

Be present in a deserted church in Hungary, as we quietly sing a simple Laude, and hear its compelling sound float back from the barrel-vaulted ceiling. Experience walking down the wide steps of the Church in Esztergom and finding the wall where colored banners, flowers and flags mark Cardinal Mindszenty's tomb.

Finally, hear, in your imagination, our footfall through the Vatican Museum Galleries, silent at this early hour, ahead of us the Sistine Chapel. (We had been given the privilege of singing there at 8:00 a.m. before the museum was open to the public). Join the 12 awe-filled women being escorted into the deserted chapel, barren of sound except for the hushed conversation of two uniformed Swiss guards, spears in hand, standing at the entrance. Envision being instructed to stand under the raised arm of the Savior, between the damned and the saved, facing the seated red-robed Cardinal who, like Michaelangelo's Christ, seemed to sit in judgment over us. We sang Gregorian Chant and music of Palestrina and Nanino, both of whom had been maestro de cappella in this very Chapel. And, although the music they composed was for male voices, we discovered that the incredible acoustic of that room enhanced women's voices in a most astounding way as well. When we finished, the Cardinal rose, beckoned us to follow him out and before we knew it, the experience of singing in the Sistine Chapel on our first day of our first trip to Europe, in 1990, was over.

In 2001 we planned to follow the Via Francigena, the medieval pilgrim route to Rome. We had no way of knowing it would be a troubled time—less than two weeks after the World Trade Center had been destroyed. While on our previous visit to Italy we had sung for Masses, participated in Vesper services and had experienced the acoustic of many early churches, this year was different. We found the Italians to be deeply moved by September 11, and touched that we had not cancelled our travel plans in spite of the fear and tragedy our country had experienced.

For the first time, we were asked to sing during special prayer services dedicated to Peace. A most moving moment occurred during our first "Incontro di preghiera per la pace" at the Pieve de Controne, high in the hills above Lucca. The program began with prayer, congregational singing, and then our presen- tation. We were moved but puzzled by an enthusiastic and emotional response in the middle of our program, after an Agnus Dei was sung. Energetic applause and loud bravos seemed inappropriate affirmation, until it dawned on us that, in this way, the Italians were acknowledging the timeless plea for peace—Dona Nobis Pacem. Grant us Peace—now as in the Middle Ages or Renaissance. They had given us the gift of heightened awareness of this text and what it had always meant, especially at that moment.

While difficult to put these experiences into words, it is our hope that by knowing some of the circumstances we encountered, you might better imagine the different churches, chapels and crypts in which we sang, forgive the occasional background interruptions, and find that the sound of these sacred places may have a richer and expanded meaning. 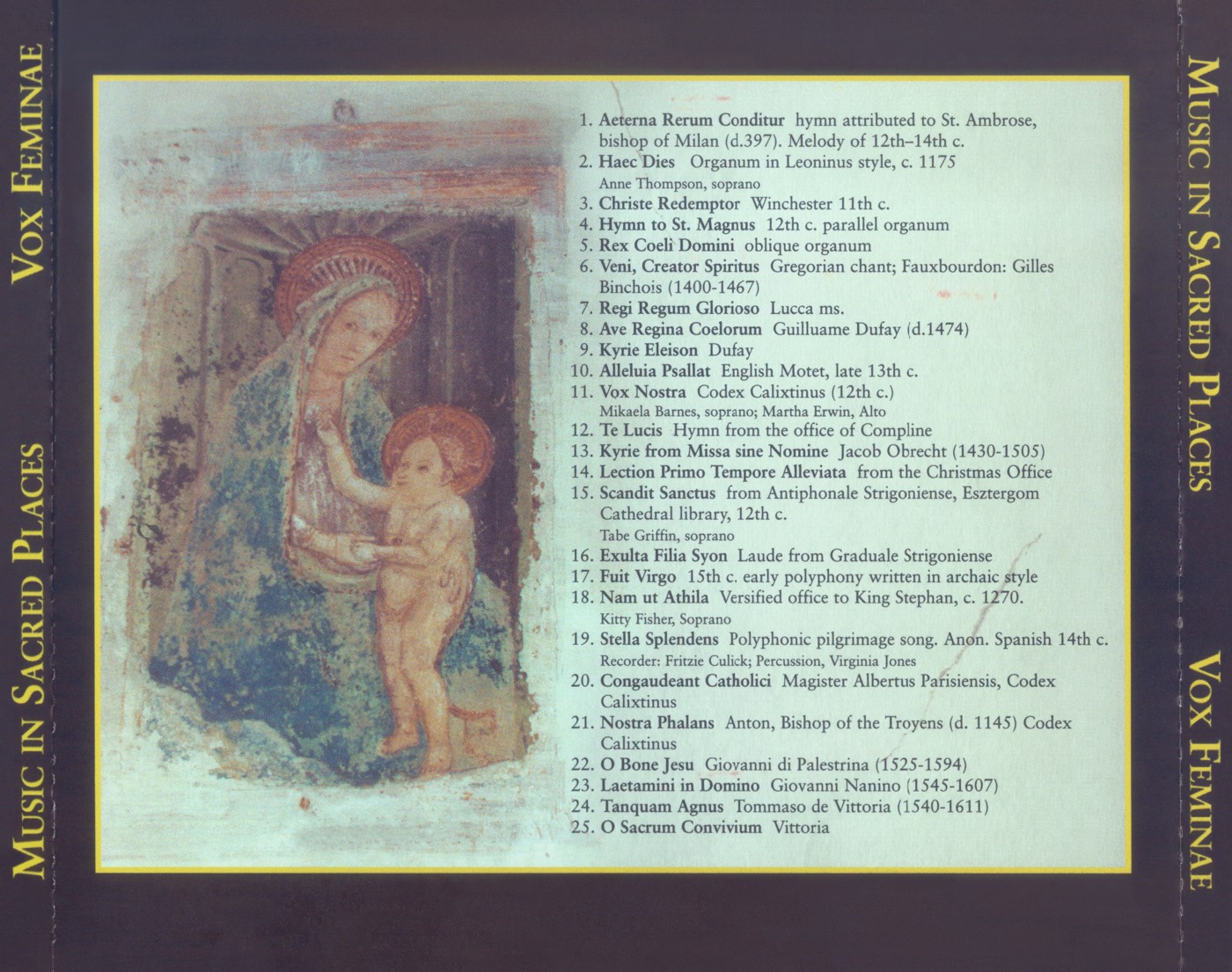