Andalusia is located at the bottom of the Iberian Peninsula, a southern Spanish gateway between Europe and Africa, bordering both the Atlantic and Mediterranean Sea. Consequently, it has become a melting pot for many great cultures, and in turn has become the alleged birthplace of flamenco. It is a musical kaleidoscope of Andalusian, Moorish-Arab, Jewish and Roma gypsy traditions.

The precise origins of flamenco are hard to define, its history being passed down through various family traditions – much like the songs themselves. However, it is believed to have begun around the 11th century, when gypsy communities from the Rajasthan and Punjab regions of India travelled to the Iberian Peninsula, bringing with them their Hindustani dance and vocal techniques.

Centuries later, all Jews, Moors and gypsies of Spain were outcast. This forced these groups together, and they ended up performing with each other (in secret dwellings), bringing together a diverse range of traditional songs and dances. This, mixed with traditional Andalusian folklore, resulted in the global phenomenon known today as flamenco.

After travelling to India and the Middle East, Ignacio was inspired by the connections between these places, flamenco and the music of Andalusia. He wanted to portray the unique, historic blend of Greek, Roman, Arabic, Sephardic, Indian and Castilian traditions, that create the mystical symbiosis of Ancient Andalusia. The result is Del Canto Gitano – Music of Ancient Andalusia.

The songs that trace the journey of this album are arranged for flamenco guitar, with baroque guitar, Greek violin and original Iberian rhythmic interactions. This is combined with the vocals of Victoria Couper and Hindustani tenor Rupesh Gawas. The majority of the album was recorded by Ignacio in India, the land from which flamenco’s first threads began, while the violin segments were recorded in London during ‘lockdown’ by Ethan Lieber. Del Canto Gitano presents not only the emerging sounds of flamenco but also its innermost beginnings…

3. Rondeña Interlude
A musical interlude played in the mode of Rondeña, a flamenco style that originated from the famous Fandango from Málaga – the oldest known type of fandango. The Rondeña spread throughout Andalusia in the 19th century, to such an extent that numerous travellers touring the region referred to it in their writings. Its name comes from the town Ronda, in the province of Málaga, Spain.
Composed and arranged by Ignacio Lusardi Monteverde | Flamenco guitar: Ignacio Lusardi Monteverde

4. Tres Morillas
‘Tres Morillas’ is a polyphony arranged for a single voice, flamenco and baroque guitars, and the interaction of a weeping violin.
The song is known for its well-crafted musicianship by an anonymous composer who describes the love of a man for three Moorish girls in Jaen, a city named by Arabs. The original tune comes from a Spanish manuscript of Renaissance music, found in the book Cancionero de Palacio, dated 1335 [sic]. The works in the volume were compiled in a time span of around 40 years, from the mid 1470s until the beginning of the 16th century, approximately coinciding with the reign of the Catholic monarchs.
Composer Anon. | Arranged by Ignacio Lusardi Monteverde & Victoria Couper | Flamenco guitar: Ignacio Lusardi Monteverde | Vocals: Victoria Couper & Rupesh Gawas | Percussion: Bernhard Schimpelsberger Violin: Aurel Qirjo

6. The Watchtower
An instrumental piece written in the style of taranta, a flamenco palo originated in the Andalusian province of Almería. It’s characterized by a shared modality of F sharp Phrygian and harmonic progression. The song starts, as common in the Cante Jondo tradition, with free rhythm, meaning that it lacks both a regular rhythmic pattern and unit. It then moves into a regular pulse that becomes danceable.
Composed and arranged by Ignacio Lusardi Monteverde | Flamenco & baroque guitar: Ignacio Lusardi Monteverde | Percussion: Bernhard Schimpelsberger | Violin: Aurel Qirjo

7. Del Canto Gitano
‘Del Canto Gitano’ is an instrumental song that compiles traditional gypsy melodies from Spain, the Middle East and the Punjab. Its harmonies have been inspired by one of Claudio Monteverdi’s choral works, Lamento della Ninfa, which begins in A minor and uses the Andalusian cadence pattern as a basso ostinato - resulting in A - E - F - E. This work was first published in the Eighth Book of Madrigals in 1638, and has grown in popularity, possibly due to the use of this exotic foreign mode.
Composed and arranged by Ignacio Lusardi Monteverde | Flamenco & baroque guitar: Ignacio Lusardi Monteverde | Percussion: Bernhard Schimpelsberger | Violin: Aurel Qirjo

8. Una Matika de Ruda
Sephardic songs, as part of the ancient Andalusian legacy, were traditionally sung by women while performing household tasks. Here Una Matika de Ruda, the story of a young woman deciding between two men before she is due to be married, is arranged for voice and guitar in the vibrant rhythm of tango flamenco. Sephardic Jews have a diverse repertoire, but their origins centre primarily around the Mediterranean basin. In the secular tradition, material is usually sung in dialects of Judeo-Spanish, although Hebrew, Turkish, Greek and other local languages of the Sephardic diaspora are also widely used.
Traditional Judeo-Spanish | Arranged by Ignacio Lusardi Monteverde & Victoria Couper | Flamenco & baroque guitar: Ignacio Lusardi Monteverde | Vocals: Victoria Couper | Violin: Aurel Qirjo

9. Girl from Shalabiyah
‘Girl from Shalabiyah’ is a traditional Arabic song from Lebanon but is also well-known in Iraq, Syria and Jordan. It is written in maqam Nahuen [Nahawand ?] (the equivalent of minor mode), features a baroque guitar and is accompanied by Arabic percussion.
This song, like many others from the Middle-Eastern region, connects to the Andalusian music that was developed during Al-Andalus era by the Moors. It also connects to the different styles across the Maghreb that appeared after the Expulsion of the Moriscos. However, it originated from the music of Muslim Iberia between the 9th and 15th centuries.
Traditional song from Iraq | Arranged by Ignacio Lusardi Monteverde | Baroque guitar: Ignacio Lusardi Monteverde | Percussion: Elizabeth Nott

12. Iberian Soleá
‘Iberian Solea’ is comprised of Cante Jondo melodies, and the piece is played on flamenco and baroque guitars in the form of Soleá and Bulerías. The violin and baroque guitar replace the voice, while the guitar remains an accompanist.
Solea is sometimes called “Mother of Palos”, it is one of the most popular forms of flamenco music, which originated from Cádiz in Andalusia. It is usually accompanied by one guitar in Phrygian mode.
Composed and arranged by Ignacio Lusardi Monteverde | Flamenco & baroque guitar: Ignacio Lusardi Monteverde | Percussion: Bernhard Schimpelsberger | Violin: Aurel Qirjo

13. Claros y Frescos Ríos
Taken from the Cancionero de Medinaceli, this is a beautiful love song that pictures the natural landscape of Andalusia in the 16th century. It is a special piece that narrates both emotions and sceneries in its melodies and rhythms.
The manuscript of Medinaceli contains Spanish music of the Renaissance period.
It was copied during the second half of the 16th century and kept at the library of the Duke of Medinaceli’s house, hence its name. Is it probably the most-known compilation of Spanish secular polyphony music of the Renaissance era –– after the manuscript Cancionero de Palacio.
Composed by Francisco Guerrero, Cancionero Medinaceli | Arranged by Ignacio Lusardi Monteverde | Baroque guitar: Ignacio Lusardi Monteverde | Vocals: Victoria Couper | Violin: Aurel Qirjo 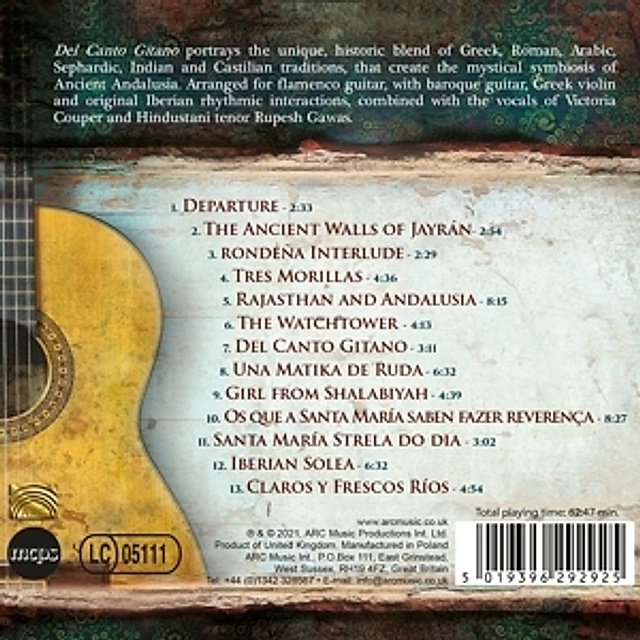 THANKS
Special thanks to Santiago Lusardi Girelli and Clara Astarloa for providing their
studio for the post-production of this album. With thanks also to Andrew Casson,
creator of the website Cantigas de Santa Maria for Singers.

Born and raised in Buenos Aires, into an Argentinian/Italian family, Ignacio started playing the guitar aged six. Inspired by his cultural surroundings, he played with his siblings as a family pastime, learning Argentinian folk songs and tango music.
His passion for flamenco started, aged 9, when he discovered the works of the Spanish flamenco guitarist Paco de Lucia. His desire to pursue the flamenco genre eventually took him to London in 2013, where he became musically connected with Spain and the rest of the world.

Ignacio is now an acclaimed London-based flamenco guitarist, producer and recording engineer. He graduated as a choir master at Buenos Aires Conservatoire in 2013, and has since collaborated with a number of performers including Ahmed Mukhtar, Baluji Shrivastav OBE and Eduardo Niebla. He has featured in live appearances at BBC Radio 3, London Festival of Baroque Music, Indian National Theatre and the Iraq Babylon Great Theatre, amongst others.

In 2019 he was awarded the LATIN UK AWARD for Musician of the Year, and in 2020 was assigned as a member of the Guild of Musicians & Singers. This same year he was awarded a honoris causa by the North & Midlands School of Music, at the level of Honorary Fellowship. This was for his outstanding contribution to world music, both as performer and audio engineer.

Ignacio has produced an extensive array of recordings, including a number of albums at the iconic Abbey Roads Studios, in collaboration with the British Museum, Royal College of Music and the Guildhall School of Music and Drama.
He has previously worked with the Latin American Baroque Festival of Buenos Aires and is currently working with festivals such as Ketevan World Sacred Music Festival (India) and London Strings Festival (UK).