Breadth of the World 
Mapping a territory, a cartographer knows the resulting map may still contain areas unknown. But one assumes that all the details will be readable and, at worst, there'll only be some small inaccuracies pertaining to a few secondary roads...A western classical and Indian flautist, Henri Tournier was, a priori, well-prepared to invite ten singers albeit singers from dissimilar practices and traditions to work with him. On a project which would gather together so many varied themes for an album. And when he first set out on the Souffles du monde project, he could have believed himself to be in known territory. For a transcultural adventure of this type, everything begins with the most obvious questions.

"We had to bring together a number of cultural styles", explains Tournier. Should one keep within oneself one's own style? Seek to insinuate it within? Or try and take it elsewhere? And all sorts of further questions arise: of intonation, accuracy, ornamentation. Then there are also questions about notational music and improvisation. And all this is multiplied by ten because there are ten singers.Those ten singers being Dorsaf Hamdani (Tunisia), Alireza Ghorbani (Iran), Pronab Biswas (India), Ustad Farida Mahwash (Afghanistan), Abida Parveen (Pakistan), Enkhjargal Dandarvaanchig alias Epi (Mongolia), Etsuko Chida (Japan) and three European singers: Anne-Marie Lablaude and Dominique Vellard, from the world of medieval music, and Carole Hémard, from the world of contemporary classical music.

And the encounters with each of those singers one-by-one, over time revealed to one of today's greatest flautists that the map previously believed to have been faithfully drawn contained a vast blank area. Most traditions know no other relation between the flute and voice than that of accompaniment, notes Tournier. Put another way: most traditions do not conceive of an autonomous discourse for the instrument when it's in the presence of the voice. And it's not just a question of custom or habit: In general, the flute is in the service of the voice and that determines also a singer's relationship to what's going to be played.

Henri Tournier's musical activity being astonishingly diverse, he knows exactly how to play in many situations. So how does he spend his days? "Half of my time is devoted to Indian music, a quarter to Western improvisational and contemporary music, and another quarter to musical encounters in the domain of world music. In daily practice, things are very intermingled: I can work on Bach with an Indian bansuri flute and on Indian music with a Western flute". 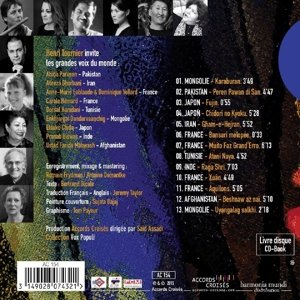